I finally worked up the courage to paint my bathroom vanity!

I have hated the cabinets in this house since before we moved in almost two years ago.  In that time, I have spent MANY hours online looking at the various options - replacing (expensive!!), staining (iffy), and painting (iffy and far to many ways to do it).  I was really leaning toward the staining option - mainly because I have successfully stained over older furniture pieces in the past.  But these are cheap, builder grade, ugly honey oak cabinets and everything I'd read led me to believe it might be hard to cover the grain.

And then I stumbled across this gorgeous image of a painted navy blue bathroom cabinet with gold hardware.  Here is where I would link the image - but being the bad blogger I am, I didn't save it, pin it, or do whatever was necessary to recall where I found it.


Use Navy Blue Painted Bathroom Vanity with Gold Hardware to Google it and you'll
get an idea of what I mean - despite combing through the results
I still haven't found the original post (*sigh*).

Just like that I was obsessed.  I mentioned to The Husband that we should paint the guest/Man-Child's bathroom vanity.  He responded with "Do what you want."  Which indicated that he thought I was just making a random statement.

The next day I hopped over to Home Depot to talk to someone in the paint department.  To my utter delight, the woman I talked to had just painted her kitchen cabinets over the summer.  And this woman told me how "easy" it was - but mentioned that it IS time-intensive - which I sort of assumed.

Now, just imagine The Husband's utter shock when I came home with all the supplies to paint that vanity.


Yep, that about sums it up perfectly

As I began to prepare the space, he found that he "needed" to be somewhere else.  But before he could leave I made him remove the doors for me.  So that and the subsequent re-hanging of the doors is his sole contribution to this task.

After he pulled his disappearing act, I had the presence of mind to actually take a "Before" picture (I know! A miracle!)


Note:  I wasn't kidding when I said ugly, cheap builder grade vanity.  I knew something had to be done.  AND I knew that if I completely screwed this project up I was more than willing to shell out the money to replace this vanity.  I didn't want to spend the money to replace the vanity right now - as I have other plans that will require money - but if this project went south very quickly, I would have replaced it.

And that's the one caveat I'm offering here - be willing to replace it or live with it if you screw it up.  Just because the paint lady at Home Depot claimed she successfully painted her cabinets - it didn't automatically translate that I would successfully paint mine.

I will give the paint lady at Home Depot credit - she claimed I only needed a quart of paint - and she was right - I used less than a quarter of the can.  I did have to buy a full gallon of primer because they only had a spray can or a gallon.  I figured that this primer will come in handy for future projects though.  This project only cost about $100.  I'll list all the products used below.

As to the "how" - I removed all the doors, drawers and hardware and cleaned every inch of it using Liquid TSP Substitute.  Then I primed each piece.  Here's what I learned - be sure to put the primer on evenly with no drips because, surprisingly, paint does not cover those mistakes.  So yes, my finished project is NOT perfect...particularly since I went with such a dark color - but I'll take it.  I could probably sand those imperfections and re-paint.  But I think the imperfections aren't that visible. I used an angled brush for the beveled edges and tight spots.  Other than that, I rolled everything I could.

Once the primer dried, I painted the first coat and let it dry for 24 hours.  Then I painted the second coat.  That coat I let dry for about three days - I wanted that sucker to be good and dry before I allowed Man-Child back in the room and put everything back together.

Now here is where I got really irritated.  When The Husband put the doors back on we experienced some nicks - totally not his fault.  I will touch those up and see how it goes - I may need to seal it but I'm going to wait and see.  And as I said earlier - if needs be, I have no problem with replacing the vanity, but I'm hoping to get a few more years out of this one.

But in the meantime?  I LOVE the result.  What do you think?


Yes, I skipped the gold hardware that was in the inspiration photo (that isn't here) despite the fact that all the doorknobs are gold in this house (see above picture).  Mainly because all those gold doorknobs are slowly being replaced.

Products I bought (all links are for your convenience only-this post is not sponsored in any way):

Products I had on hand:

Plastic (to cover the floor)
Gloves (to keep my hands clean - this marginally worked - re the Kilz in my hair at one point).
Drill
Screwdriver

The upcoming steps in this project?  Remove the other vanity (yes, there is another vanity - the original owners obviously coveted two vanities in this room rather than a linen closet) and install floor to ceiling shelving and sand the Amityville Horror paint off the walls (the last owners used old, oil based paint - and the oil continues to leach through - maybe that gallon of Kilz will come in handy after all...)

If you plan to tackle this project - I would suggest waiting until it's warmer so you can contain the majority of the mess in the garage.  I was stuck in a small space with everything everywhere and it was a mess.


You can only imagine the contortions I went through trying to get in and out of that room without brushing up against wet paint or primer...which may explain the Kilz in my hair. 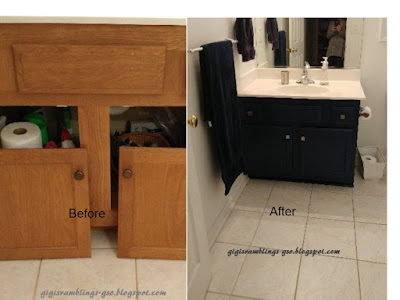 I am so pleased with the results!  So much so that I am now eyeballing the Master Bath vanity...
Posted by Gigi 7 comments: