How to break a husband's spirit...

Months ago we had planned to see my Mother-in-Law for her birthday (this coming Monday).  Then we had the unexpected pleasure to be invited to a wedding that we had assumed was going to be "family" only...which happens to be next Saturday.  After determining that we would do both - because honestly, we can't NOT go see my MIL NOR can we decline this wedding invitation.  She is in her 80's, healthy but still...

And the groom is a child we've known since he was teeny, tiny...

So both are TOTALLY necessary.

Despite The Husband's misgivings (insert eye roll here...by now, we all know how he can be sometimes...God love him.), I told him that it was non-negotiable; we would be attending both - I promised him that when he gets to be 80 he won't look back and say, "Boy, I really regret that we went to that wedding so soon after going to see mom".  To his credit, he is cautiously optimistic that both events will be fun (they will be...as he will discover once we get there).

Knowing we had all this coming up, I have kept a running list of what needed to be done.  At the top of that list was purchasing shoes for The Husband to wear at the wedding (because God help me, if I have to hear him complain about his dress shoes ONE more time...).  Back in the day, I would have just bought what I thought best and brought them home for him to try.  But lately, he has decided he has an "opinion" when it comes to what he wears (I have informed him that's fine but I have final veto power - he has yet to question my power, thank God) so he wanted to come along.

Except that was a dirty lie!!

I've been asking him for the past three weekends to join me in a shoe search.  And every weekend he has declined.

So guess what we had to do today?  In addition to laundry, packing, watering plants, etc.  If you guessed, find shoes, you get the gold star!

As we both had errands to run this morning we went our separate ways and then we met up at one store.  No luck.

So went to the next...(he refused to pay THAT much for a pair of shoes.  Despite me telling him that this would probably be the last pair of dress shoes he'd ever buy - apparently, he took that to mean I was declaring him at death's door!  But what I really meant was, that as rarely as he needs to wear dress shoes these shoes would last him for YEARS...he wasn't buying it).

And then the next.

And then the next.  (Is it my fault that department stores cater to women and have a very slim selection when it comes to the men's department?! Or that he decided that he NEEDED to be involved in the selection process?)

Took a break for lunch and then hit the next store - success!

Although, to be truthful, I think he was just so worn down from the process of looking at and trying on shoes, that he just caved...on it all.  He didn't care how much the shoes cost (but we DID luck into a great deal!) or what they looked like...he just couldn't bear the thought of going to one or more stores.

Now we are home - one of us is finishing up the laundry and packing her stuff (while simultaneously crafting this post).  And the other might be napping on the couch with nothing packed...

As you all know, Hurricane Florence slammed into Wilmington, North Carolina last Friday and thoughts and prayers are with those that were affected.  Man-Child and I were in that area recently and are heartbroken at the devastation.

Then we were told to brace for the after effects that we would feel inland.  And the hype was/is getting us all very nervous.  Knowing that we had a few trees that are "iffy" on one side of our house...the side our bedroom is on, of course.  I determined that I would be sleeping on the other side of the house for the time being.

We've had rain but, so far, not nearly the amount that we were told to expect.  We've also had some wind but, again, not nearly as strong as what we were told to expect.  But yet, the news reports keep telling us to be on alert.  I can honestly say that I don't think we have too much to worry about at this point but who knows?  They are the ones with the education, tools and experience.  So we shall see.

I grabbed this screen shot from CNN.com this afternoon and was relieved to see that we aren't in the direct track and wondered why local new stations were still issuing flood warnings. 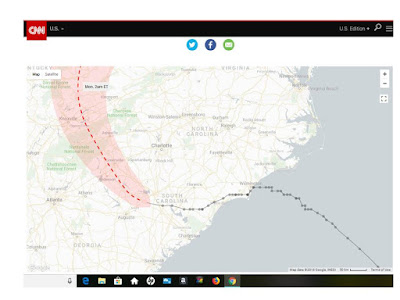 Then I saw this screen shot (also taken from Cnn.com) and it became clear... 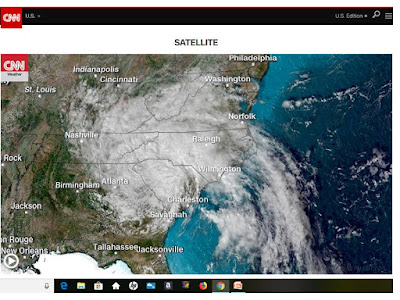 Probably because the storm (now a tropical depression) is SO big!  As you can see, it is covering both North and South Carolina and is overlapping into Virginia and Georgia as well!  So although we aren't in the direct path we are getting hit with the outer bands - which explains the hype.

And as I was typing this a tweet came across my feed stating that there is flash flooding in Charlotte...which, as you can see, also isn't in the direct path.

I do have a funny story to share - although, especially to my husband, it wasn't funny at the time.  Friday evening as we were battening down the hatches in preparation for the worst, I asked The Husband to bring in the chairs from the front porch.  At that time they were calling for really high winds.  He told me that there was no need but I insisted.

Being the great husband he is he acquiesced.  But, for some reason, rather than carrying the chairs down the steps and around the house into the garage he decided to carry the chairs through the house and into the garage.  As he was carrying the second chair in he felt pain in his finger.  He put the chair down and that's when he noticed he had just carried a wasps nest INTO the house!  The sneaky buggers had made a home under the chair.  Then he began trying to kill all the wasps.  Luckily, there were only a few of those wasps so he was able to dispatch them fairly quickly but, I have to tell you, having wasps flying around in the house led to a bit of hysteria.

We put some baking soda on his swollen finger and once the pain and swelling from the sting subsided even he had to admit it was kinda funny...who brings a wasps nest into the house?  Especially, given with his history with bees.  Apparently, it is his destiny to spend his whole life having run ins with wasps and bees.  I've lost count of how many bee stories he has under his belt now.

So that's the update.  Currently, we are safe and most likely will not be in any danger...but I will still be sleeping on the other side of the house until this storm has passed because I still don't trust those "iffy" trees...and we will be getting someone out here to assess those trees sooner rather than later!

And, of course, as I was just getting ready to hit "Publish" both the wind and the rain has stepped it up quite a bit.  I still think we will be okay but will be keeping an eye on the news...

UDATED: It's REALLY pouring now and we have a bit of standing water...but we are going to be okay. I just hope we don't lose electricity...
Posted by Gigi 3 comments:

Despite my fears, these two knuckleheads pulled it together enough to get the lights and internet turned on before today...

Today was officially "move in" day for Man-Child and his buddy.  And although, I had my doubts as the title infers, they did manage to get the basics set up.  AND, as a bonus, were able to wrangle some extra bodies to help with the actual move; thank God because The Husband and I are way too old to be wrestling furniture up three flights of stairs.

"Theoretically" Man-Child is moving out tomorrow. I have my doubts since nothing is packed and, from what I understand, no one has called the power company...or more importantly, the internet provider. #weshallsee Is the urge to say "Told you" strong? Yes, it is. #bitingmytongue
— Gigi (@gigirambles) September 7, 2018


To be perfectly honest, I carried one VERY light box and was finished with the actual "moving" part quite early on in the process.  From there I moved on to the emptying boxes, washing dishes, finding homes for said dishes, arranging furniture and buying a few necessities that the boys surely never even thought about...like shower curtain liners and toilet paper.

Of course, being the tornado that Man-Child is he has left a swath of destruction in his wake...along with a great deal of stuff that he didn't think to bring with him.  Which means that I will be packing up the detritus and hauling it over to his apartment sometime in the near future.  Then I get the joy of cleaning out and rearranging the rest of it.  A mom's work is never done.

Dropping him off at college was probably the hardest thing I've ever done but this?  This is the weirdest.  When we dropped him off at college I knew he'd be coming back home eventually.  But now...we won't be waiting for him to come home and that is a little unsettling but I am excited for him.  He's moving into adulthood officially.  And while I still sometimes miss that sweet, little guy I am so extremely proud of the adult he has become.

Of course, he still has one foot still in the door as he has already informed me that he will most likely stay here most Friday nights during high school football season as our house is closer to the school where he coaches.

And then, of course, the lure of food will be strong...since I'm not confident that these two guys can actually cook anything as tasty as The Husband.  And I'm sure the promise of some of mom's baked goods will bring him running.
Posted by Gigi 3 comments: