It's no big secret, but I've been following the "less is more mantra" lately.  Much to The Husband's chagrin.  Why the chagrin?  Because that means I have been expecting him to follow the same mantra, which is failing.

Although, I've been able (so far) to get him to let go of some things - and food - that we absolutely have no need for; he continues to bring things into the house - that we probably have no need for.  I figure he's a work in progress.  In fact, this weekend we were able to successfully rid the garage of a bunch of stuff we did not need.  Granted, this project is far from over, unfortunately.

But lately, I have noticed a new, recent obsession of The Husband's.  An obsession that I think is his silent rebellion.  The new obsession?

Random, right?  He seems to have developed an unnatural fear of not having enough.  It's like he thinks I'm going to fall down on the job one day and he won't have enough of either clean items.

This despite the fact that I faithfully do laundry every week.  And every week, despite the dwindling options in his drawer throughout the week, fresh laundry always appears just in the nick of time.

Last weekend, he asked if I was going to be doing laundry any time soon.  Why?  Because there were only two clean pairs of undies in his drawer.  While the rest were in the dryer.

I kid you not.

We have been married for twenty-eight years.  In that time, he has never, ever - not even once - been without clean underwear or socks.  Never.

But what did I discover today while putting his folded unmentionables away?

That he had purchased new socks and underwear.

Generally, this wouldn't be an issue (particularly if he routinely tossed worn items.  He does not.  I usually do that if I notice the wear while folding) but the drawers that hold these items are not limitless.  And now, I am struggling to fit everything neatly into their respective drawers.  He cannot explain this compulsion.  I'm putting it down to the fact that this is rebellion of the "less is more" movement going on in this house.  Or he wants to see how creative I can get to keep those drawers tidy with more stuff.

Those drawers that I Marie-Kondo'd the heck out of - and, after all this time, still stay fairly tidy.  I know!  Even I'm surprised it still works...until he introduces new items - that he didn't need.
Posted by Gigi 2 comments:

"You just want me to be perfect!" Or...why our garage looks like it does.

The Husband and Man-Child are taking a trip next month where they plan to fish and do manly things, I guess.  Which resulted in the following conversation.

The Husband:  "I need to get some new fishing gear for the trip."

Me:  "Okay.  But don't you already have some gear in the garage?"

The Husband:  "I'm not sure what is broken and what isn't."

Me: *blankly stares at him, while wondering why he didn't just get rid of the gear that was broken when he figured out it was broken*

The Husband, accurately reading the expression on my face:  "You just want me to be perfect!  And to throw things away.  And to not bring plastic bags into the house!"

Me:  "If that's your interpretation of perfect, then yes, that is what I want."

And he wonders why the garage is in the state it's in.

We are working on it though - and it looks a lot better than it did, but obviously, still has a long way to go - gee, I wonder why?

He has promised that once we get it in shape he will keep it that way.  Considering he's been pretty good about his closet, I have a glimmer of hope - but just a glimmer, mind you.
Posted by Gigi 2 comments:

A treat to celebrate getting those pesky taxes done...

Before I left for Texas (yes, by now, I've gone and returned) The Husband declared that the weekend after I returned we would do our taxes, and that weekend?  It was today.

As I've mentioned before, several times, I HATE doing our taxes.  Usually, I am the one at the keyboard asking The Husband for the necessary data while he scrambles through the assorted paperwork to find the information, usually throwing out an "I DON'T know!  I can't find it!  Oh!  Here it is!"  In addition to doing our taxes, I had to show Man-Child how to do his taxes.  Fun, fun.  Especially, since the sun was shining and the day was glorious...here's hoping tomorrow's forecast is more of the same, so maybe I can get out and play in the dirt.

But to be fair, this time - for both our taxes and Man-Child's - was fairly uncomplicated and dealt with without all the hand-wringing and "I DON'T knows!"

And as a reward for getting those pesky taxes over and done with, I decided that I would make a chocolate cake with peanut butter frosting... 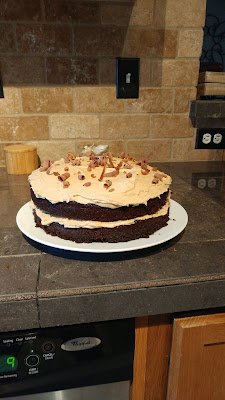 It is currently sitting in the fridge for the requisite hour - I can't wait to try it.  I found the recipe here.

As for the trip home?

I had a great time - as I always do when spending time with one of my oldest friends.  She is getting married in May and I was happy to help her get some wedding planning squared away (Dress? Check.  Cake?  Check.  Centerpieces? Check.  Minister?  Check.  Venue?  Check.  What the groom will wear?  Check.  Yes, we WERE busy!) all while playing "catch up."

Were their hiccups along the way?  Of course.  We are talking about me after all.  But my suitcase finally caught up with me, I didn't run out of gas and I eventually made it home.  And the taxes are done for another year.  And I have cake waiting for me...so I have no reason to complain, no reason at all.

(FYI, I just had a very small slice and,...if I do say so myself, it IS delicious!)
Posted by Gigi 3 comments: