Despite telling myself over and over that I'll do better, I never seem to *sigh*

Remember this post from November 2016!!  You will note, that I had cleaned out the dressing room/closet/whatever, but had left two boxes of pictures, frames, etc. to be dealt with later.  My reluctance to deal with those boxes had to do with pictures that I don't have copies of and what to do with them.

And here we are a year and some months later; and today, I finally went through those boxes.  And, as I reckoned in the above referenced post, I was able to toss some pictures and others were sent upstairs while I ponder the best way to deal with them.  I'm sure what will eventually happen is that I will scan them and consign the originals to an album, as that only makes sense.  I'm sure two years from now, I will have a post saying "Remember those old photos I sent upstairs to be dealt with later..."

Before I could begin dealing with those two boxes though I had the jigsaw puzzle to finish.  Yes, the card table was set up in the dressing room/closet/whatever - so between that and the boxes this room was not a fun room to be in, as it was crowded and messy.  I attempted to finish the puzzle last night but, as I told The Husband, I'd spent so much time looking at the remaining pieces that they were beginning to look like the same color.

This morning when I came in to finish the puzzle, I noted that most of the remaining pieces were different shades of black and blue - so I wasn't wrong.  As I slowly winnowed away the remaining pieces, I was looking forward to that last, VERY satisfying "there" as I snapped the last piece into place, when I realized...


The last piece was no where to be found! I "might" have told The Husband that this was probably Man-Child's doing - who isn't here this weekend.  The Husband thought this was unfair BUT I recall a few years ago, that he had absconded with a random piece.  He wanted the satisfaction of putting that last piece in place without doing the work.

Eventually, I gave up and went to get dressed.  When I opened the closet, I found the missing piece.  Apparently, it had attached itself to my clothing at some point and fell off in the closet.  At least I got that last satisfying, "there" as I snapped it into place.

Now that those boxes have been dispatched - off to Goodwill filled with the clothes and shoes that I pulled from the closet that I will never wear, the puzzle and card table have been put away and the room is positively huge with nothing cluttering up the place.  And once again, I have reclaimed the room.

Can I now state with certainty that we are officially unpacked after moving in almost two years ago?  No. There is still a box of books and another stack of books sitting in the master waiting for me to figure out a home for them - which will require a new bookcase, I fear.  The problem?  Where to put said bookcase.  And let's not even mention the garage or upstairs - where there are several items in addition to those photos to be dealt with!

But we won't dwell on that just now - no, instead we will relish in the fact that this one room is done.  Well, not really.  I have thoughts for the future but am working with what I have for the moment; so for now, it IS done.

And, for an update on my disgusting and lazy co-workers...


Someone has cleaned the knife - but not the platters.  Personally, I think Housekeeping finally took pity on me; because I seriously doubt if anyone in this group would have taken care of it; obviously since they are still sitting here.  It's still beyond my comprehension why these items haven't been claimed yet.
Posted by Gigi 3 comments:

What I've been preoccupied with lately...

All you have to do is search my winter archives to find me complaining about how cold it is; as my husband informs me, I'm a baby.  BUT this time, I'm in the right to complain.  This morning's high was 8 degrees.  I think we haven't made it out of the 20's for the past week.  I am SO over it already.  I live in the South not in Canada!

At any rate, during the Christmas holidays we have a tradition of doing a puzzle or two.  Well, actually, *I* do a puzzle or two.  I'd started this tradition hoping to entice the guys to work on it with me - well, actually, Man-Child as I knew The Husband had NO interest.  Surprisingly, Man-Child has no interest either.  He actually claimed that he "hates" puzzles...this seems odd to me given the way Man-Child's brain works...I figured he would enjoy them.

At first, I was disappointed that this was another tradition that was mine and mine alone - along with watching It's A Wonderful Life on Christmas Eve (I have NO idea why all the photos in that post are sideways - or why the guys don't love that movie as much as I do).  But I've come to enjoy spending that quiet time, squirreled away looking for matching pieces.

This Christmas I completed one puzzle and figured that was that for the season.

So what prompted this to happen yesterday? 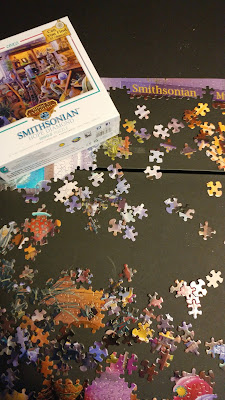 Well, the table was still up.  I was sick (thanks to my guys.  Or my friend and her family.  Surely one of them was the culprit).  And the weather.  It was too cold to go out and do anything.  Plus, as mentioned, I was feeling poorly.

The Husband asked how I could sit there for hours sifting through the pieces looking for that elusive piece.  Obviously, he and Man-Child do not know how extraordinary it feels to find that elusive piece, pop into place with a self-satisfied, "There!" whispered to myself.

Generally, I confine puzzles to the Christmas holiday because I know how I am - I just spent the majority of yesterday and today confined to that table whispering, "There!" occasionally.  Ignoring the laundry that needed folding, the plants that needed to be watered and the bathrooms that needed cleaning.  During the holiday, I have that kind of freedom.  When I go back to work, I do not.

So, I finally pulled myself away to tend to the things that needed tending and took the time to craft this post.  Because I know where I will be spending the majority of my evenings for the next several days or so...
Posted by Gigi 2 comments:

Happy New Year!  I wish only the best for you and yours for the coming year.  I think we all deserve a fantastic year out of the coming months.

The alarm clock went off well before dawn this morning.  I may have uttered some "colorful" words before I crawled out of bed in search of coffee.  It's not that I've spent the past few weeks sleeping in - far from it.  But I haven't HAD to wake up so very early.  Nor have I HAD to be dressed and out the door in the pre-dawn hours.  So, to say the least, this morning was rough.

Luckily, I had brought my work laptop home during the long holiday so I was able to keep up with work.  I also popped in a couple of times to deal with mail.  But generally, the week before Christmas and the week after are usually so dead at the office that there wasn't much to keep up with - so I was able to return to the office without being buried; which was nice.

But going back into the office meant that I had to deal with people.  *sigh*

I was having a conversation with a co-worker this afternoon when he mentioned our Holiday Treat Day/Week, that was held in early December.

This is what prompted the conversation.


These dishes, including the knife encrusted with solidified icing, is right in my sight line.  My co-worker informed me that this came up while I was out with another co-worker.  And that this co-worker said, "We aren't going to do anything with these dishes because when Gigi gets back, SHE will eventually get tired of looking at them and will take care of it."

When I asked WHO had uttered this font of nonsense, he refused to say; probably because he was afraid I'd use the crusty knife on the perpetrator.

But here's the deal...I KNOW I'll get tired of looking at those dishes.  BUT, I refuse to touch them.  First of all because they aren't mine (WHY hasn't the owner come looking for them?!) and second, because REALLY?!  I am not the maid or mother of this floor.

I then recounted the whole coffee saga to my co-worker, he doesn't drink coffee so had no idea.  Since then, I have issued a fatwa on the break room.  I have since bought my own coffee maker and refuse to monitor what is going on in there.  Which means they are down to two carafes - one regular and one decaf.  Since no one on this floor drinks decaf, someone wrote NOT DECAF on the decaf pot.  Yes, it's total anarchy around here.

And because of this those nasty, disgusting, gross dishes will sit there FOREVER!

Eventually, someone else will get tired of looking at them and will throw them away...soon, I hope.