Remember that door I was SO excited about?

If you don't, you are forgiven since that post is about two months old.

The door - after a SIGNIFICANT delay finally showed up four weeks ago (and it's taken me this long to calm down enough to post about it).  But due to conflicting schedules was not able to be installed until the next Friday.  As you might imagine, I was SO excited.  I should have known...

The installers showed up on time with the door (at this point, I can only assume it was the door I ordered, since I never saw it) only to inform me that it wasn't measured properly.

Are you flipping kidding me?!  I specifically told my husband that I was willing to pay for them to come measure because I knew the measurements had to be EXACT.  And it's a good thing I did...I guess, since this is on them.  But now we are back to square one.

After the installation fiasco, we were told that the store would contact us - they never did.  So we drove to Lowe's that Saturday and cancelled the order.  The store manager was very apologetic and blamed the delay and the incorrect measurements on the vendor, which tells me they need a new vendor, and that someone needs to address the very serious lack of communication with the customers.


All that aside, I still don't have that door that I was ridiculously excited about...and I have to start over - minus the big box store - speaking of which...where does one go to get a door after deciding that big box stores just aren't up to the task?

And seriously?  Who would have thought that a simple, freaking door would be something to be so difficult to get?  AND be ridiculously excited about AND be heart broken over?  That's the true hallmark of being an adult I suppose.
Posted by Gigi 2 comments:

I have the weirdest co-workers....a mystery.

As a company, for some reason, we seem to be bringing on some really weird people lately.  Yes, we had weird people before but the number seems to be growing exponentially ever since The Transaction a couple of years ago.

By way of example, from what I am hearing the great coffee saga continues.  One person makes the good stuff, the jack-ass comes along and pours it out and makes the swill.  Luckily for me, I have removed myself completely from this situation by having my own coffee maker at my desk - that in a nutshell is office life; in order to keep from completely losing your mind or hurling disgusting coffee at the offensive co-worker(s) is to remove yourself (as much as possible) from the situation.

And then, of course, there was the one who either refused to come pick up, clean and remove the disgusting dishes from our Christmas Treat fest, or completely forgot about them and will freak out when they can't find them about six months from now.

You know, I can't remember now how long it took for those dishes to disappear...I just knew I wasn't going to be the one making it happen.  Word is someone picked them up and shoved them in a cabinet somewhere...sanitary, I know.

And then there was yesterday.  For every floor, we have two sets of men and women's restrooms.  One is closer to me than the other; so, as I'm sure you can reasonably conclude that the one I venture into most often is the closest one.  And you would be correct.  Except yesterday, I happened to be nearer to the other one when *ahem* I needed to visit said room.  I walked in only to be stopped in my tracks.

I left the restroom and went to find a sane co-worker to ask her what was up with the recycling can in the bathroom.  She had no idea.  She theorized that maybe, with the recent heavy rains a leak was discovered?  A plausible theory to be sure...except for the fact that the can was completely dry.

I asked another sane co-worker and she too had no idea what was up with the can being in the stall.

Today I made a point of going to that restroom just to see if the recycling can was still there.  It was.

I know the evening cleaning crew has a policy to not touch or move anything unless there is a note labeling it "trash" or whatever - so I'm fairly certain they did not put it there and they won't remove it until they are told to do so - which means that from now on there will be a random recycling can in the handicap stall of that restroom until the end of times.

What in the actual hell?  Why would someone put a recycling can there?  Just to make us all wonder?  I wouldn't put it past some of these people.  Now I will always wonder...who did it and why.
Posted by Gigi 3 comments:

Man-Child recently brought it to my attention that Stephen King had a new book out.  And, he reported, that it was a LARGE book.  This piqued my interest, as I continue to maintain that where Stephen King is concerned, the larger the book the better, as the characters and story line are more fleshed out; drawing you in.

Which is how I found myself at a local book store a couple of weeks ago buying said book. 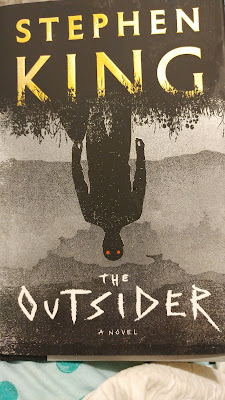 It's no secret around here, I adore Stephen King's writings.  This was no exception...but...before I recommend this one to everyone I know - the initial crime is horrific.  Like, really horrific. And it involves children.  The description is graphic.

But overall, if you can get past that (and it's hard) this book is really good.  I've been in a reading slump for the past few months.  It was more than a slump...it was more like a "I can't be bothered because nothing is interesting enough" kind of deal.  This book brought me back to reading.

The description from Amazon:

An unspeakable crime.  A confounding investigation.  At a time when the King brand has never been stronger, he has delivered one of his most unsettling and compulsively readable stories.

An eleven-year-old boy's violated corpse is found in a town park.  Eyewitnesses and fingerprints point unmistakably to one of Flint City's most popular citizens.  He is Terry Maitland, Little League coach, English teacher, husband, and father of two girls.  Detective Ralph Anderson, whose son Maitland once coached, orders a quick and very public arrest.  Maitland has an alibi, but Anderson and the district attorney soon add DNA evidence to go with the fingerprints and witnesses.  Their case seems ironclad.

As the investigation expands and horrifying answers begin to emerge, King's propulsive story kicks into high gear, generating strong tension and almost unbearable suspense.  Terry Maitland seems like a nice guy, but is he wearing another face?  When the answer comes, it will shock you as only Stephen King can.

The book is about 576 pages long - I read it in just a few days because, seriously, it is a page turner.  In fact, I spent about 90% of last Sunday just reading.

Again, the "unspeakable crime" is horrific; but if you can make it past that it becomes a compelling story.

Much to Man-Child's chagrin, I have already lent the book to a fellow King enthusiast.  What he failed to realize is this - I lent it to him first in order to be sure we get the book back for Man-Child to read, as I lent it with the caveat that Man-Child still wanted to read it.

What books are you finding to be page turners?  Spill it, we all want to know!
Posted by Gigi 5 comments:

Email ThisBlogThis!Share to TwitterShare to FacebookShare to Pinterest
Labels: books I love enough to tell you about


As my birthday is quickly approaching - and it's a big one - I thought I would share a few things that have made me very happy/smile.

I found this on my desk yesterday morning along with a very touching birthday card.


My Co-Worker Friend surprised me!  She snuck back into the office after we'd left Thursday to deposit these because she knew I would be taking the off on the actual day.  When I saw her come in, I went to her cubicle to thank her for her thoughtfulness, she then presented me with this...


Another Alex and Ani bracelet to add to my collection!  My oldest friend from Texas introduced these to me when we met up in Charleston last year, and I have fallen hard for them.  This one takes me up to four - I need an intervention.

My fabulous mother-in-law sent me birthday money as she always does along with another sweet card.  With that cash burning a hole in my wallet, I headed out to see what I could find.  I headed over to J. Crew Mercantile with the hopes of scoring another pair of those amazing jeans.  I found them BUT was disappointed to discover that they do not carry the shorter length jeans/pants in this store anymore.  I could have cried.  I was so excited to find that we had this store so close (25 minutes); rather than drive the hour to the outlets.  I'm not sure if the outlet store is still carrying the shorter lengths - so I guess that means I'll have to make the drive to find out.  I hope they do because although the clerk assured me I could still find them online, I much prefer to shop in the store to avoid returns.

While I was out and about, I popped into Talbots next door and found these magenta beauties on sale. . .


As our office "culture" has gone from strictly business to casual business wear to casual, I have been on the hunt for cute, flat shoes.  It's rare these days to find me in heels.  It's also been a challenge when I'm out shopping as I am so used to looking for "work" clothes rather than casual clothes.  There's also the conundrum of all the "work" clothes that are currently hanging in my closet.  I actually have a draft post about all this; I should probably dust it off and post it one of these days.

The other thing that makes me smile is this mascara.

I think Kate at The Small Things Blog mentioned it once or twice as a favorite drug store beauty product, so I picked it up to try.  So far, I am loving it.  It lengthens and makes my lashes look thicker minus any clumps!  Now granted I've tried other mascaras that have done the same but I don't know why subsequent buys of the exact same product doesn't necessarily produce the same results.  I've got my fingers crossed that this product remains true from tube to tube.

And lastly, I am also loving this foundation.

Historically, I don't like liquid foundation as they are too heavy and messy.  I used to use foundation in compacts but I have found that by the end of the day, it had worn off.  Plus, I was having a hard time finding a color that wasn't too dark or didn't wash my face out.  I've discovered that this color (warm beige) is PERFECT for my skin tone and that if I apply this using a brush it isn't too heavy.  Bonus?  The coverage does last all day.

So there you go, a few good things that are making me happy/smile.  Do you have anything that is making you happy/smile to add to the list?

*As usual, all links are provided for your convenience and I have not/will not be compensated.