Today my calendar reminded me that I needed to get cash for the office lottery pool - can you call just two people playing a pool?  It's a question for the ages.  We used to have a great big group of us but one by one they all started retiring and when it was down to just five of us, the other three decided to cash in and call it quits.  Those other three will be sorry when we win it!

At any rate, I made a note to myself to remember to get cash when I stopped in at Target on my lunch break.  Needless to say, I forgot.  Telling myself it was no big deal, I planned to stop at my bank's ATM, which was on the way back to the office.  Which is a good thing because the only reason I remembered to stop was because I saw the building.

It must be said, I rarely visit the bank's ATM.  Ninety-nine percent of the time when I need cash, I just get cash back from an in-store transaction.  So, it had been maybe a year ago that I had last visited this particular ATM.

I pulled into the ATM drive through lane and immediately noticed that they had a new machine - which, honestly, seemed weird as this particular bank has recently been bought out...by their next door neighbor.  What can I say?  That particular corner is home to at least five banks.

But other than thinking that their timing was off, I went ahead and inserted my card.  When it asked for my PIN number, I keyed it in and hit enter.  And this was where it all went to hell in a hand basket.

Do you see what I see?

At first I thought I had missed something from the get go.  So I canceled the entire transaction and started again.  Turns out I didn't miss anything that I could see, there was no option for actually withdrawing cash.  I mean, I'm sure it's there SOMEWHERE as there was the slot for dispensing said cash, but what the trick is to getting it to give me the cash eluded me.  And I really didn't have the time to spend trying to figure out what it was...given my lunch hour was more than over at this point.

Needless to say, I'm sure there will be a video of me cursing the machine and calling it names circulating within the branches in the coming days.  Let's just hope it doesn't find it's way to YouTube where it would certainly become a viral sensation.   And then the local news would pick up the story and the tag line would be, "Tonight at six, a local woman flummoxed by an ATM machine, can you believe it?  Haha."

At any rate, since my own actual bank is refusing to give me money; now I have to try and remember tomorrow to get the cash from my usual source...Target.  *sigh*
Posted by Gigi 6 comments:

I am failing woefully at posting consistently...hence the title.

Last weekend we took the kids (Man-Child and Bonus-Girl {The Husband's daughter}) to Smith Mountain Lake in Virginia for their birthdays.  At this point, it is just easier to give memories rather than actual "gifts."

Originally, this was The Husband's trip but, at that last minute, I decided to join them.  I had a doctor's appointment early that Friday morning - knowing this, I now know I should have packed the night before....

In my defense, we couldn't get into the VRBO until 2:00 pm, so I figured I'd have plenty of time after the appointment.  And I *did* have enough time, but I also neglected to make a list and to take the weather forecast seriously.

Usually, I pack according to a list so nothing gets forgotten.

Turns out, I forgot my pajamas, robe and slippers.  Fortunately, I remembered that BEFORE we actually got to the house.  If you know anything about Smith Mountain Lake it is in the middle of nowhere.  We ended up stopping at the only option in town - the Dollar General - to cobble together some pajamas and socks.  It was reminiscent of the last time we visited my mother-in-law - same scenario, middle of nowhere PA - and The Husband had forgotten to pack HIS pajamas - Dollar General to the rescue.

Also before making it to the house we stopped at Food Lion and picked up a few supplies to get us through the weekend, including some baking supplies as I planned on making Man-Child's and Bonus-Girl's favorites - Praline Cake and Key Lime Pie.

I did have the presence of mind while packing to include ingredients I had on hand, so that meant I only had to buy a handful of ingredients when we got there.

As usual, I snagged VERY few pictures of the house or the people *sigh*.  But I fell in love with kitchen island - which isn't "staged" you'll notice - as all of our stuff is all over it. 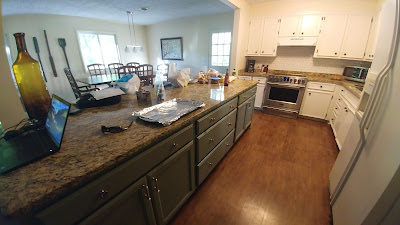 The owners have renovated extensively, and are apparently still "in progress" with the kitchen as they haven't changed the white cabinets yet.  And yes, that island is as long and wide as it appears; I absolutely adore everything about it.

I was apprehensive about baking in someone else's kitchen with their equipment which didn't include a stand mixer...and I will admit, it was a little stressful, but I pulled it off somehow.  And the kids were both very happy with the results. 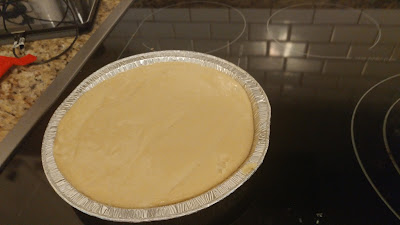 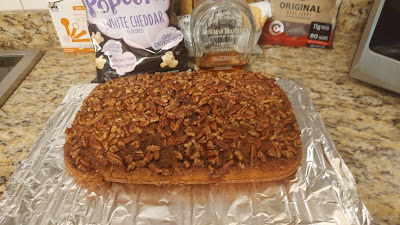 The Husband was happy as he was able to do lots of fishing on the dock in the back of the house.  This house overlooks the lake - kind of - there were a LOT of trees between the house and the lake. 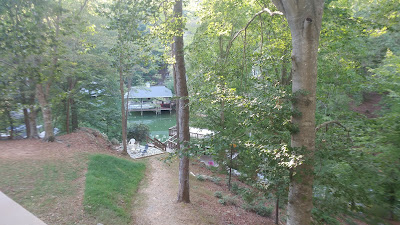 I was happy to spend a lot of time out on the back/side porch all weekend.  But remember how I mentioned that I neglected to take the forecast seriously?  When we arrived Friday afternoon, the temperature was hovering in the 90's and was super humid.  But when Saturday dawned, the temperatures had plunged dramatically. 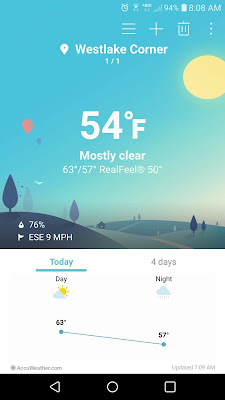 And guess what else I forgot to pack?  If you guessed a jacket or, at the very least, a shirt with long sleeves, you get a gold star.  Luckily, the Boy Scout The Husband had packed a couple of jackets, so I confiscated one and looked like a poor, little urchin for the remainder of the trip.

There was one hiccup to the trip, on Saturday afternoon we stopped at this boutique that was holding some kind of - I don't even know what to call it - there were other vendors set up outside, there was a band (that left before we got there), a catering truck, etc. in this giant field in front of the store.  After Bonus-Girl and I crawled all over the store we met up with the guys who had wandered outside while we shopped.  We decided it was time to head back to the house and as we were walking back to the car, Bonus-Girl tripped over a half of a cinder block that was randomly sitting at the edge of the field and went down HARD onto the gravel drive.  Needless to say, we had to pick gravel out of her palms and her legs will be host to some pretty large and colorful bruises for a while.  Turns out, that lone piece of cinder block had been placed there by the band to hold down their extension cords - and they neglected to remove it.

But, for the most part, the birthday trip was a big success.

Yes, I was disappointed.  But I will forge on.  Eventually, I'll get that darn door...hopefully before I die.
Posted by Gigi 6 comments:

A play and the door saga continues...

Based on the theater's description, I was expecting a funny play - apparently, I missed the last line in the description...

Come to the party, but don’t play the drinking games. The lights are on late at George and Martha’s, as two couples in a quiet college town turn a nightcap into an all-out, all-night fight. Peek through their windows and uncover the devastating truth behind the illusions.

Truly, I knew absolutely NOTHING about this play going in and it was funny and, unexpectedly, also INTENSE.  We enjoyed it immensely but both agreed it was INTENSE.

Here's a link that gives a bit more info about the play - but be warned, if you read the entire article there are spoilers, as in it basically tells you the entire play including the ending, so skip it if this sounds like a show you might like to see.  You can comfortably read the overview though.

A bonus - looking ahead into the season, there are at least two more plays that we would love to see - including It's a Wonderful Life.  Sadly, those tickets are mostly gone even though it starts a good two months from now...apparently, the Christmas shows get snapped up at the beginning of the season.

The door saga continues - (the beginning and part two) BUT we may be coming to an end on that particular year and a half old drama.

The Husband mentioned that he had heard about a company that would do the door.  Needless to say, I was skeptical because all of the inquiries we have made have been pretty much ignored.  I get it.  A door is not a big money maker for most general contractors.  I sent the company a message and they actually called the same day.

Of course, I did not answer the call because I don't answer numbers I don't know.  I had meant to enter The Husband's cell phone but, of course, entered mine by mistake.  Once I retrieved the voicemail, I handed the number over to The Husband.  And here is where the miracle occurred.

He called them yesterday morning.  And they actually showed up at my house yesterday afternoon (THE SAME DAY!) to discuss the door!  I was FLOORED when The Husband shared this with me.  They left a book of doors they offer - that happens to have the door I want - and told him that we need to fill out a form online and they will give us an estimate ASAP.

So, fingers crossed that I may have a new door before the two year mark of this ridiculousness comes to pass.