Despite the fact that this is "short" week, thanks to the Memorial Day holiday; I decided to take yesterday off.  Why?  Good question.

We finally found a car for Man-Child (we won't speak of the fact that I've been after Hubby to make this a priority since...I don't know....MARCH!) and we needed to get the plates and tags for the car so we could bring it home.  So I decided that I would take the day off to stand in line at the DMV's plate agency.  The one of TWO that serves this area.  Don't get me started...

But before I could even go stand in line, I had to wait for my husband to obtain the temporary, proof of insurance for this car (of which, I reminded him to do on Wednesday AND Thursday!  Obviously, he forgot) and arrive on this side of town - which wouldn't happen until about 10:30 am.

To kill time, I cleaned house.  Almost top to bottom...no judging.  But I did clean the refrigerator of all the science experiments - so I get extra points for that.

Once he called to tell me he was headed my way, I hopped in the car and headed to the agreed upon rendezvous.  The timing was excellent.  He handed me the papers and counseled me to be patient.  We decided that if, miracle of miracles, I happened to make it out alive, unarrested, and early enough that we would have lunch.  I wasn't holding out hope.  About any of it.

Upon arrival, at the dank, seedy place that houses the DMV's, outsourced plate agency, I discovered that the line was out the door.  Of course.  Once I made it inside the door, I discovered there were two lines.  It took me a minute - and some discussion with my fellow line standers - to realize which line I needed to be in.  I was elated to discover it was the shorter of the two.  Fifteen minutes later, I realized that while this line was shorter it was also the slower.  *sigh*

After forty-five minutes of standing in line, it was my turn.  I confidently handed over the paperwork that my husband had so thoughtfully filled out beforehand.  And was promptly informed that unless I had a power of attorney to sign for my husband I was out of luck, since he had neglected to add my name to the title.  And, of course, I didn't.

Needless to say, I wasn't happy.  The whole reason I took the day off in the first place turned out to be a major waste of time.

So, of course, I called my husband to rant (because somehow he should have known this would happen) and to meet for lunch.

As I was driving to lunch, I received a call from "someone" who was looking for another place on his/her route.  *sigh*  This person needs to figure out his/her various routes quickly.  I'm getting rather tired of being stressed out and tense every day that they go to work.  AND being asked to be a human GPS.  Luckily, this time he/she was able to figure it out on their own - which tells me that soon, very soon, I won't have to worry so much.

Luckily, after eating lunch, I felt much, much calmer.  Funny how that works.

At any rate, Hubby ended up having to go to the DMV anyway (and ended up in the wrong line; which - sue me - made me laugh) and I came home to clean Man-Child's room.

When MC came home from college he just DUMPED all his stuff in the middle of his bedroom and has been living around it.  I couldn't take it anymore.  Had we still been in our old house maybe I could have held out; seeing as his room was on the other side of the house.  But seeing as that now I have to see the mess EVERY SINGLE TIME I walk into my bedroom...?!  I just couldn't take it.

I have informed him that the pristine condition in which he found his room this evening is the condition I expect it to be on a daily basis.  We will see how that goes.

So now, as I sit here reflecting upon the events of my "day off," I've discovered something...

Days off are supposed to be relaxing.  Most of mine are anything but.  I need to work on that.
Posted by Gigi 3 comments:

Once again, I find myself blatantly ripping off someone else's material.....

How much do you "hate" people?

This was the topic the other day on the Bob and Sheri show.  Yes, once again, I find myself "borrowing" their material.

The topic was selected because of this tongue-in-cheek survey on Buzzfeed.  Here was my result.... 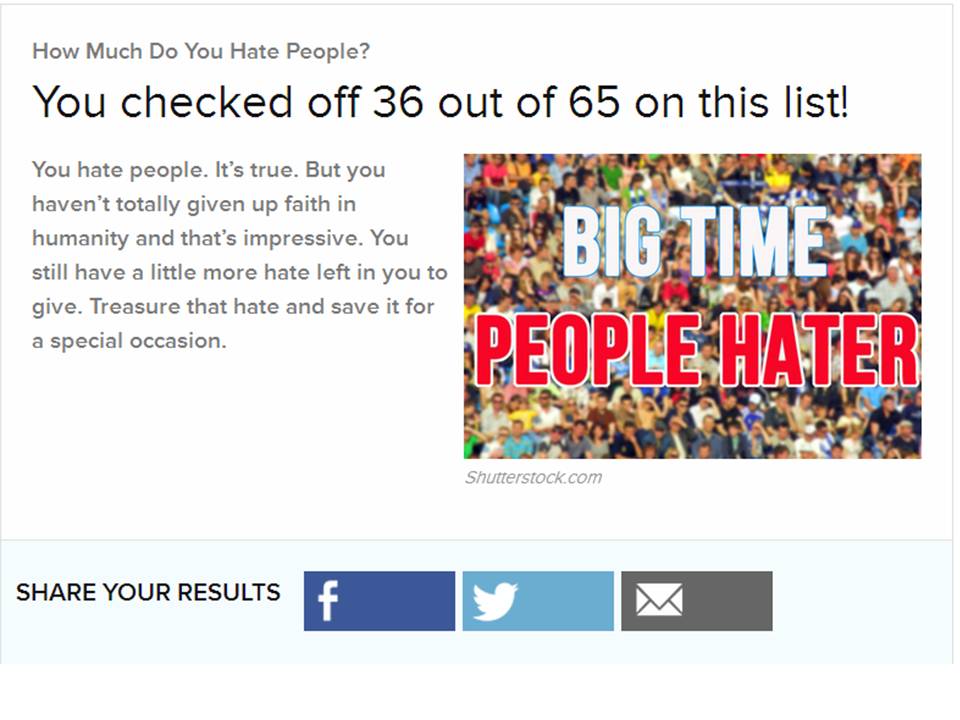 Now, of course, I'm sure the results would vary from day to day.  Apparently, today I am not harboring resentment against ALL of humanity, only a portion.

But, if I could have had the option to quadruple-check a couple of them (most especially, "When someone makes loud chewing or drinking sounds") then my results might have been dramatically different.

But I also couldn't help but notice that they've missed a few.  Such as....

1.  When someone leaves less than a quarter inch of coffee in the pot and doesn't make a new pot.

2.  When someone refuses to restock the printer and/or fax machine with paper.

3.  People who don't use turn signals (it's not all office related).

4.  When someone procrastinates for weeks and then tells you they need something from you.  NOW.

5.  When "someone" (aka Man-Child) promised that he'd be packed and ready to go when I went to pick him up for the summer.  Not only was he not packed; he was still asleep and didn't answer his phone; despite me calling him eighteen times. And then?! To compound matters, he hadn't even begun to clean.  *sigh* Suffice it to say, he lives like an animal.  It's a story for another day.

6.  When someone fiddle-faddles around, or has a convoluted order, at the drive-thru.

7.  When they give you the wrong drink at the drive-thru.

Hmmm, maybe people get on my nerves more than I thought, since I could go on and on.  But I won't.

So what about you?  What's your score?  Or your biggest pet peeve?
Posted by Gigi 5 comments:

I just HAVE to share this information with the world.  And no, I haven't been compensated in any way, but IF the company wants to send me a free, lifetime supply I wouldn't say no.

What could this amazing product be, you wonder.  Well, let me tell you.  It's Hollywood Fashion Secret.  This stuff is fabulous!

I don't know about you - but besides the belt issue described in the link above - I have narrow shoulders.  This fact was hammered home to me after I fell in love with, and bought, several boat neck tops.  And then began the constant task of trying to keep my bra straps under wraps.

And, as you can imagine, the sight of peek-a-boo bra straps ruined the whole look I was going for.

Which led me to the "almighty Google."  I figured I couldn't be the ONLY one with this problem.

And it turns out - I wasn't.  Only, the results that I received included wearing a tank top of the same color underneath (too hot and/or bulky) or sewing (never gonna happen).  And then, buried in the comments, I saw someone mention this tape.  Although, they clarified, they'd never actually used the product.  Rather than Googling the product, I found myself falling down a different rabbit hole in the Internet - as you do.

Now I have been known to use various office products (packing tape and/or staples) to fix wardrobe malfunctions; i.e. ripped hims, etc. with so-so results.

Despite what you may think, packing tape (even the good kind) does not hold all day and staples...well, they can actually ruin your clothing.

I applied the tape to my bra strap and secured the top to the tape.  And miracle of miracles!  It held!  ALL DAY.  And surprisingly, even upon removal the tape was still sticky; whereas packing tape would have long last its stickiness by the end of the day.

Now, obviously, you need to remove the tape and toss it after each use.  Also, you want to be careful to not get it on your skin.  Not that it will remove the top layer of your skin upon removal, but it is slightly uncomfortable and will leave a residue but nowhere near as painful as removing duct tape would be.  Ask me how I know?

But all that aside; this product works.  And I am no longer spending an inordinate amount of time adjusting my clothing.  Which means I'm far more productive at work.  Well...that's my story anyway.
Posted by Gigi 2 comments: