Well, I wasn't expecting to do THAT today - but I'm sure glad I did...


Remember my Backyard Dreaming post from a few months ago?  Well today was the first day in forever that the temperature was a reasonable 73 degrees and overcast.  So this morning, I got it in my head that I would spend about 20 minutes or so, and relocate those irises.

When I got out there though I noticed that some morning glories had taken over the patch where I had planned to put the irises.  So I started to remove them.  Then I discovered that these morning glories were strangling the rose bushes, so I kept going.  And then I was attacked several times by that damn blackberry bush.  Did you know that as pretty as morning glories are they can be considered invasive?

I didn't.  But I do now.  After I had pulled up all of them (I also now know I will be fighting these things forever now according to this link.) and the blackberry bush had attacked my hair and my arms for the millionth time, I knew it had to come out TODAY.  So I went and got my loppers.  As I was hacking away at the bush, Man-Child unwittingly wandered out and officially became my helper - whether he liked it or not.  We hacked away at that thing and then began to dig all the stumps and roots that we could...until we saw a baby black snake.

After that I was DONE.  I don't mind yard work, but I DO mind critters.  If we hadn't seen that snake, I feel sure I'd still be out there even now; hours later.

So even though the ONE thing I went out there to do didn't get done, I still feel a huge sense of accomplishment because the hardest part of this ongoing project is done, even though I know, like the morning glories, I will be fighting the remnants of this bush for a long, long time.  Every time I looked out there and saw that damn blackberry bush, I would become overwhelmed at the thought of tackling that part of the project.  Which is why my initial plan had been to start small.  But now that this piece of the puzzle is pretty much dealt with, the moving of the plants themselves will be a breeze.

And not only that?  The island looks SO.MUCH.BETTER now!  The transformation is absolutely amazing.

Man-Child also learned a thing or two about gardening.  As we removed another plant - no idea what it was but it was UGLY and the root ball was huge, he asked me, "Is that sea shells under there?"  No, they were bulbs.  I told him to pull all of them out because we don't want that ugly thing to come back.

Here is where I was going to do a Before and After shot, but it turns out that is one piece of the yard that I didn't take a photo of for the Backyard Dreaming post.  So instead you just get the After shot.

(The Husband has promised that the rest of the fence will be coming down soon.  He doesn't yet know that the ridiculous birdhouse is also coming down....)

Now I can see what we have; what we might need to fill a few gaps and my vision for what I want this backyard to look like is becoming clearer.

So although, I'm exhausted after spending 2 and a half hours out there and am covered in scratches, I am one happy person.

Am I surprised that it turned out this way?  No.  As much as I was dreading dealing with it, I knew I'd never purposely make the time to do it.  Like any onerous chore, I have to just take a tiny step in the direction I need to go and then tenacity takes over and it gets done.

Now I just have to get my friend over here to take the daylilies away on the left side of the yard.  Once those are gone, the other plants relocated, the rosebushes are trimmed then we can seed that area and then we will have a normal looking backyard and be able to turn our attention to other projects.

It has been brought to my attention that the deadline for our performance reviews is the 30th - so just about a week away.

This is the first performance review that I will have to endure in the last two years.  Due to the transition well over a year ago - reviews weren't done company-wide as we all had other, more pressing matters to attend to and now they are back AND re-vamped!

Personally, I think performance reviews for someone in my position is a waste of time - particularly if I am doing my job capably.  Why do I think it's a waste of time?  Easy...in my entire career I have only had one - maybe two - managers that actually knew what I did on a day to day basis.  Oh sure, they have my job description to go by - but that doesn't actually speak to the nuts and bolts of my daily duties.  So if the managers don't really know what I'm doing or how I'm accomplishing it how then are they capable of reviewing my performance?  They aren't.

My new, big boss - who is a very nice person - particularly doesn't have a clue.  Mainly because it seems he has little interest in what is going on outside of his office.  Case in point - we have less than a week to get this exercise in torture behind us all and he has yet to say a word about it to anyone in the department.

My next complaint regarding this new and improved performance review process - apparently we, the employees, are supposed to be prepared for this meeting (the one that hasn't even been addressed in passing yet) by having worked out what our developmental goals and aspirations are for the coming year.

What does that even mean for someone in my position?

Considering my qualifications, I've pretty much peaked in my career.  I can aspire to be an attorney or an executive - but the odds of my getting there ever, much less in the coming year, are slim to none.  As for developmental goals?  What?

I just had a thought - maybe my aspiration could be to streamline the whole review process.  Knock it down to a basic formula...

I freely admit I was cranky before I even found out about all this but honestly, this has just raised the level from mildly cranky to full on cranky-pants mode.
Posted by Gigi 2 comments:

We moved from our last house to the rental in December of 2013.  Man-Child did not unpack.  Though this irritated me to no end seeing all those boxes sitting in his room, I understood the why behind his not unpacking.  He was at school for the majority of the year and he knew we would be moving again eventually.

We moved into this house in February and those boxes have sat in his room since then, making me increasingly twitchy every time I walked in or by that room.  But here we are, approximately 2 1/2 years later, and he has FINALLY unpacked.  He and I spent the majority of the afternoon going through each and every box.

The memories he found were priceless, pictures of friends, mementos from various significant life events.  He even came across the Words of Wisdom that we had people fill out at his high school graduation party, he re-read each one with a smile on his face - and placed them in the "keep" pile.  He also found a bunch of stuff he now realized he'd outgrown.  To my surprise, he kept the things I would have suggested that he keep and tossed the same things I would have tossed - he is my child after all.

Before we started, he kept saying that he had nowhere to put all the stuff - by the end he realized that he didn't need all the storage that he thought he needed.  We hauled out five bags of trash (not trash, trash but stuff that really couldn't go to charity) and four bags headed to Goodwill.  He even admitted that it felt good to have a real room and not a room that felt like a storage room.

Until I walked into my closet - where MC deposited a few boxes which contain household stuff.  Now I have to find a home for this stuff...and let's not even think about the garage and all the stuff in there.  THAT can wait until the weather turns.
Posted by Gigi 3 comments:

I'm onto your tricks, Husband...

A couple of weeks ago I asked The Husband to tighten the toilet tank in the guest bath as it wobbled every time I cleaned it.

Surprisingly, instead of putting me off as is wont on some chores, he decided to take care of it immediately.

H e tightened the tank and then thought he should go ahead and tighten the bolts in the floor - why he thought they needed tightening, I'll never know.  The next thing I knew he was swearing like nobody's business.

Apparently, the bolts hook onto something and he couldn't get them re-connected - honestly, I don't know all the technical details, but it was bad.  To the point that the toilet was out of commission.  The next day he called his plumber who informed him that we would need a new toilet.

And here's where I begun to suspect this was all a ploy on The Husband's part...

See, ever since we've moved in The Husband has complained about our toilets - he thinks they are too low and doesn't like the fact that the seats are round and not oval.  I don't disagree with him but I don't harbor the hatred of them that he did.

Luckily, Man-Child hadn't come home for the semester yet and we didn't have any company as we were stuck with only one working toilet for over a week.  The next weekend we purchased a toilet and then discovered that it wouldn't fit in my (old) car. *sigh*

So we left it at customer service as we tried to scrounge up someone with a truck, van or trailer - which we eventually did.

Several days later, the plumber was able to come and install the new toilet.  The Husband is EXTREMELY happy with it.

Which is why I waiting to see what "happens" to the Master Bath toilet.
Posted by Gigi 2 comments:

I walked into the bathroom yesterday and found this... 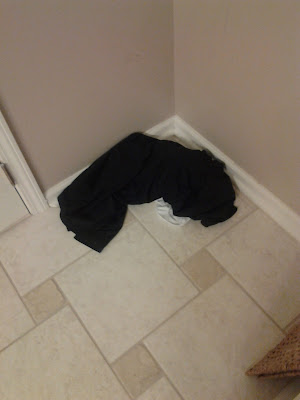 Generally, our clothes hamper resides in this corner.  It appears that I have trained my husband very well.  Too well, actually.  He knows that this is where his dirty clothes belong.

Whenever I take the hamper down the hall to do laundry this is what happens.

I can't complain, unlike other husbands I've read about who leave articles of clothing all over the house - socks in the living room, shoes abandoned in the middle of the hall, a shirt tossed over the bed - these are issues I don't have to deal with because I never find his clothes anywhere but in the hamper...unless, of course, the hamper isn't there.
Posted by Gigi 2 comments: