I've been Missing In Action lately.  I know!

But, I've been sick.  Yes, I realize in my last post I claimed to be feeling better - what can I say?  I was wrong.

Immediately after writing that post I began to feel worse - at that point I hadn't even realized that was even possible.

Hubby, funnily enough, was struck down with the same bug on the same day.  So for once, we have experienced our illness together which actually gave us sympathy for each other.  Usually, we don't have much sympathy when the other is sick.  Oh, we pretend to feel sorry for each other - but in truth, we are calling each other a big baby under our breath.  Yes folks, that's what 20 years of marriage gets you.  Fake sympathy.

Although we are both on the mend - he seems to be getting better faster.  I am not pleased.  He continually points out that if I did this and didn't do that then maybe I'd be feeling better - like he is some kind of health guru.  Funny how this attitude greatly reduces any amount of sympathy I might have for his lingering symptoms......


In other news -prior to falling ill with the plague I entered another give-away (I know-I'm getting crazy over here entering all these contests!  What's next? I guess it's true that you have to play to win - so once again I am counting on hitting the lottery!) and I won!  The fabulous Kathryn was offering some Google swag, so I had to play along because - come on - it's Google swag!  And lo and behold, this is what the mailman brought me earlier this week.  It was the only thing that could have made me smile at that point. 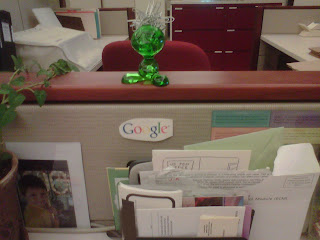 Why yes, that is a little Google-alien magnetic kind of guy who also happens to stand in as a paper clip holder (you can't see it in the picture - but Google is emblazoned across his tummy).  Isn't he the cutest?  It has promptly been decided that he must be kept under lock and key as several co-workers have been eying him covetously.....thank you Kathryn - he's adorable!  He almost made me forget that I was dying sick.....

Wait!  What's that?  Do I hear Man-Child coughing and sniffling - the big baby......
Posted by Gigi