How does the two very different topics relate?  They don't.  Unless I am giving you a quick re-cap of my weekend.  Which I am.

On Saturday the most unusual thing happened.  My husband and I went to a matinee.

This is unusual because it normally it is easier to move a mountain than it is to 1) get him to actually go to a theater and 2) actually have us both agree to see the same thing.  And that is why I rarely get to the movies unless I am with a girlfriend or Man-Child.

But, somehow, Friday night we were discussing various movies and we both agreed we would like to see Lincoln.  So I declared it a date.

Although there was some hedging on his part - not about going but he thought he might want to see Argo instead.  I'm sure it's a good movie - but not one that I'm particularly interested in seeing at this point.  Especially at theater prices.

Although, we all know the outcome of the movie, Lincoln, I'm reluctant to give anything away because I don't want to spoil the experience.  But I will say this, the movie is excellent.  Daniel Day-Lewis is a very convincing Lincoln and does an fabulous job.  As does Sally Field; I heard she had to fight  for the part - and I'm glad she did because, as usual, she was amazing!  And if you are even slightly interested, I'd heartily recommend that you go see it.

Although I've never been a history buff, after the film I found myself scouring Google for all the information I could find on Mary Todd Lincoln and her youngest son, Tad.  I was curious to see what had happened to them.  As I'm sure you all remember from your history classes taken, lo those many years ago, much of the attention was focused on Lincoln, his legacy and not so much on what happened to his family after he was gone.

I was saddened to learn that Tad died when he was eighteen and that Mary was, in fact, institutionalized, by her oldest son, for a time.  But looking at the circumstances, I'm not surprised.  She outlived three of her four children.

Which leads to shower curtain liners....somehow.

I don't know if I've mentioned it before, but we have been displaced from our shower.  We've been forced to use *shudder* the guest/Man-Child's shower.

We've been displaced since prior to Christmas.  Despite Hubby's everyday statement, "We've GOT to get this finished this weekend!"

As I am sure you can surmise, via this post, the shower has yet to be fixed.

At any rate, over the Christmas break it was brought to my attention that not just one of my guys, but BOTH of them, had issues with the shower curtain rings.  Seriously?  How hard can it be to work shower curtain rings?  (It was also made apparent to me, that none of us are tolerant of the others shower habits.  But surely, that is another post for another day.) 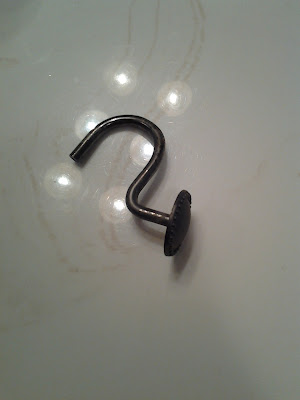 Then the boys tend to yank the curtain right off the rod.  Because, ya know, brute strength is required when closing a shower curtain....

So in my infinite wisdom (weeks later, of course) I forced Hubby into a department store prior to the movie and bought some closed rings... 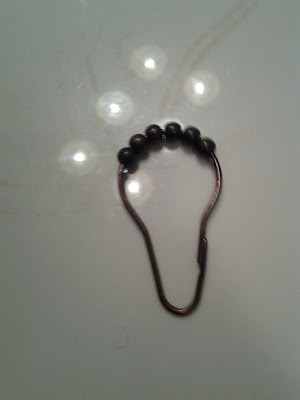 With the purchase accomplished, I figured yesterday would be the perfect day to remove the old rings, wash the curtain and the liner and replace with the new rings.

After I washed the (plastic) liner and began to hang it, I realized that somehow I had shrunk the liner!  Who knew that plastic could shrink?  That much!

To my dismay, I discovered that I'd washed the liner in hot water, in an attempt to get that bad boy as clean as it could possibly get.  Which, apparently, is a big NO-NO in the plastic world, and that darn liner had shrunk.  It had shrunk to the point that it was useless.

Not to be undeterred, I marched off to the nearest Target in search of another liner.  They aren't expensive, this was no big deal.  I bought the liner and headed back home.  And as I was replacing the liner and the curtain, I marveled at how wonderful it is that the ring people and the liner people keep things so simple, by selling twelve rings in a box and liners and curtains with exactly twelve grommets.  Everything in life should be so easy-peasy.....

What kind of foolishness was this?

Right about that time he pointed to the package and said, "Well, here's the problem...this liner is for a shower stall...not a tub."

In my twenty some odd years of dealing with bathtubs, shower curtains and liners, I have NEVER run across different sized liners....never, not once!  NOW I find out that they have different sizes?

"You need to go back and get a different size" he said.

Needless to say, I gave him the death-ray glare since, obviously, none of this would have happened had our shower been fixed weeks ago...as he's been declaring since before Christmas!

So this evening, after work, I found myself back at Target perusing the shower curtain liner aisle - funnily enough, half an aisle is dedicated to liners....seriously, who knew the options were endless?  Heavy weight, medium weight, light weight.  Clear.  Almond.  White.  Regular size and stall size (which I still maintain is a new edition to the liner world).  Did I notice a price difference in the regular size and the stall size?  No, I did not.  Apparently, you pay the same price for the ten grommet liner as you do for the twelve grommet liner.  I sense a ripoff.

So I leave you with this - go see Lincoln and pay attention when you are in the market for a new liner.  Oh, and what are the odds that my shower will be fixed before Easter?  I'm thinking slim to none. *sigh*
Posted by Gigi