Zipper Feet...yes, I know...I have more important things to worry about but still...

Still packing over here, but I have learned a few new things (that everyone else probably already knows about, but I didn't.  So I'm feeling pretty proud of myself....) in the past two weeks.

Last weekend, I learned how to make envelope pillow shams, all thanks to this video.

Prior to viewing that video, I had looked at dozens of websites that described the process but, for the life of me, I could NOT figure it out until I saw this video, usually I'm good with direction...this time not so much.

About a year ago, I saw this tutorial on Pinterest that claimed you could recover a pillow sans sewing....

I tried it.  It was a complete and total failure.  But I lived with the results for a year a few weeks before I attempted the envelope pillow sham, which worked like a dream!  I was so pleased with myself.  No picture, because I was too lazy to couldn't find the case that holds all my bobbins, so I used black thread to sew the gray cover, figuring it wouldn't work out any way....I was wrong.  It was perfect.  Even The Husband was impressed.  I figured since the envelope part would be in the back no one would ever know about the black thread....but I didn't count on the fact that The Husband doesn't have the keen eye for decor detail that I do and when he makes the bed about half the time, he places that pillow on the bed back side up.  *sigh*

Which explains why, when I came across this post about how to sew a pillow cover with a zipper, I was intrigued.  I mean, why not?  Obviously, I am a WHIZ with the sewing machine now! 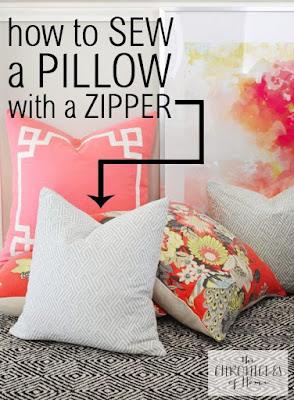 It was going well, up until I was presented with how to attach the zipper foot to the machine.  Oh, getting the pressure foot off was self-explanatory, but attaching that zipper foot?!  Impossible.  So I headed off to Google, of course, but it still didn't make sense.

After about an hour of total frustration, I headed out to the local JoAnn's (this is what I will miss about living in town, having JoAnn's or *insert any other major retailer here* so close - I got there and back in less than 20 minutes), where this wonderful person was able to show me how it worked.

So, in an effort to save anyone else from the sheer torture that I went through, I am here to show you how to attach a zipper foot. (Holy cow!  Now I know why I couldn't understand what others were saying...do you know HOW hard it is to photograph the proper way to attach a zipper foot?! I now have more photos of the zipper foot than I do of my only child!)

Despite what may be your first inclination, this is NOT the way the zipper foot attaches to your machine. 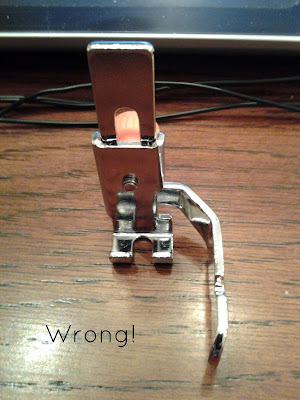 
I know, right?  (Please don't tell me if I've only mystified you even more.  Instead head to your nearest fabric shop, they will be happy to show you the proper way to attach the damn zipper foot).

But once I got the zipper foot properly attached, I was able to see this project through to a successful conclusion.


And to prove that I actually was able to put a zipper in....


The Husband was even MORE impressed...he also noted that he would probably be seeing a lot more pillows around the house.  He would be right.

There will be pillows EVERYWHERE!!!

And I'm reining in the impulse I now have about making our clothes...that would only end in tears.  And disaster.