I'm actually following up on a previous post...I know!  How often does that happen?  It's rare, I admit.  And the fact that this happened approximately FOUR weeks ago...it's unheard of!

And not only that?  This post actually has pictures!  I know, I'm getting ALL kinds of crazy over here.

Although, I did leave the actual camera (recently found, forgot I even owned one...much less two!  That's what unpacking will reveal) at home.

The trip down to South Carolina was pretty much an "adventure" as in Man-Child promptly fell asleep about an hour into the trip, which left me without a navigator.  He does this just about every time.

As I am still fairly "old school" and I print out the directions (easier to look at while driving than the phone).  These particular directions, which claimed to be the shortest route, had us driving through back roads of South Carolina.  Which meant that we were in the middle of nowhere.  Seriously.

At one point, I found myself turning around at least six times.  Finally, I admitted defeat and asked my phone for help.  Which is why I found myself cursing myself hours later for leaving my camera on the table when I was in historic Charleston with a deader than dead phone.

I snagged a map from the lobby and we headed to our ultimate destination.  Only to discover that ALL the marked parking garages were full.  Of course.  We also discovered that we weren't the only ones that thought Charleston was the perfect Spring Break getaway.

After battling epic traffic, we headed back toward the hotel and lunch.  We stopped at what was billed "Best Deli in Charleston" - I beg to differ.  It was mediocre at best.  Then we went back to the hotel where we discovered our room still wasn't ready.  We chatted with the check-in person.  This was key.  She knew of a parking garage that always had parking.  AND?  She was willing to share.

So we headed back to historic Charleston and were successful in finding parking and began checking out the sights.  This is when we discovered that both of our phones were completely dead.  So no pictures from day one.  Which meant that we had to go back to certain places on day two just to get pictures.

Yup, pretty much sounds like the way we roll.

Also, it has become apparent that I have a thing for old cemeteries, churches and trees.

Unfortunately, it was locked and we couldn't get inside.  According to a conversation that we overheard at one of the local shops (so we can't attest to its veracity) this is the tallest building in historic Charleston...and there is a law that no newer buildings can be taller than this one.

This is the Old Slave Mart. 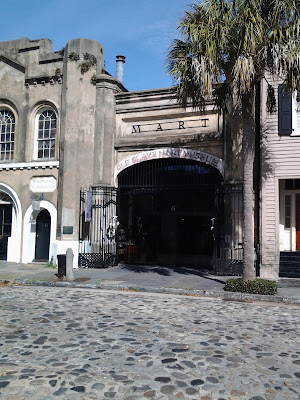 It gave us both the creeps to realize what went on here.  Unfortunately, this was a fact of life back then.

Then we found this cemetery and I loved it...it was hauntingly beautiful. 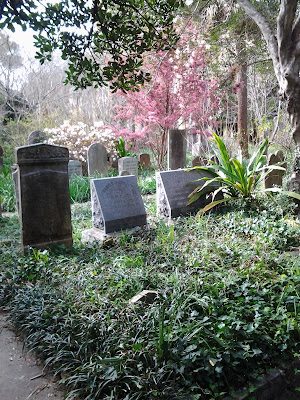 It was kind of shocking to see how closely the markers were placed...practically one on top of the other. 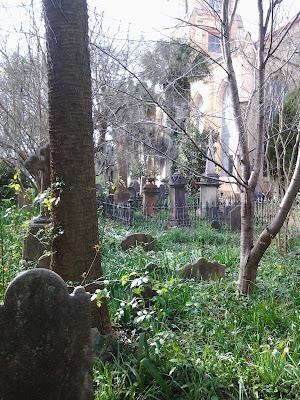 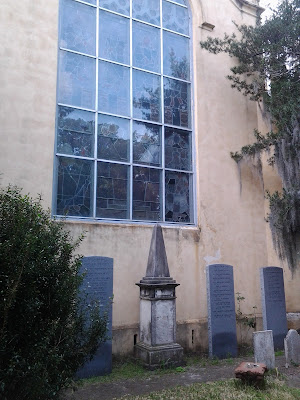 Between the windows, the moss hanging from the trees and the interesting markers...I was hooked. 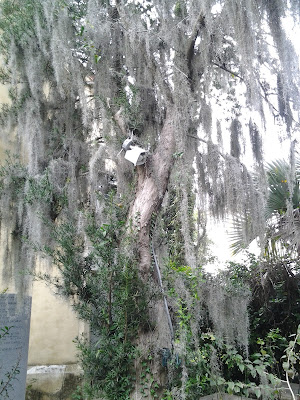 I don't know if you can see the power line that is running between the branches.  I wonder how they do that.  Here, as you drive along our roads, you will see many, many trees that have been butchered by the power company.  It is their effort to keep the trees away from the power lines.  It's a crying shame how they ruin the trees.  Somehow Charleston has figured out a way around that - maybe Duke Power should take lesson or two or five from Charleston. 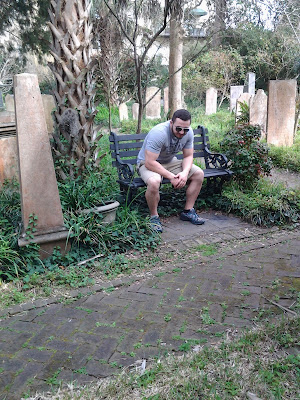 Right about now he is ready to move on from the cemetery.  And he also demanded that I stop taking pictures of him.

As we headed out, I took one last picture. 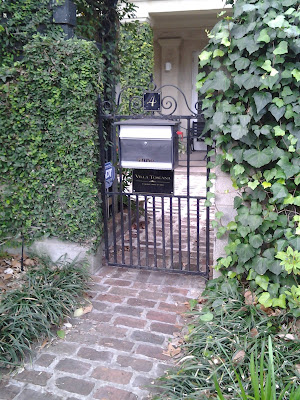 This is the back entrance of one of the several private residences that back up to the cemetery.  While I would love to have this oasis right outside my back door, I don't think I would care for the many tourists looking into my back yard on a daily basis.  Yes, I realize the hypocrisy of that statement as I took this picture.  I will say though, we were much more restrained in our touristy curiosity than others.  At one point I witnessed a woman hanging over a private gate, using her zoom lens to capture a shot of a private residence.  A feet down the road, I heard a man yell over a fence saying, "Hey lady! Can I ask you a question?  Hey!"  Finally, I heard her annoyed response drift over the wall, "Excuse me, I am on the phone!"

We next turned our sights to the south and headed off to see The Battery.

I'll pause here to note that Man-Child tried to kill me on this trip.  Apparently, there was a free tram to ferry people around but MC absolutely refused to use it.  So we walked.  And walked and walked. And walked some more.  See this map? 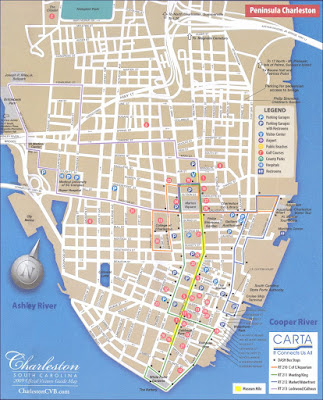 I swear in the two days we were there we walked every single street.  Some of them we hit multiple times.  By Saturday evening my feet were done with me. 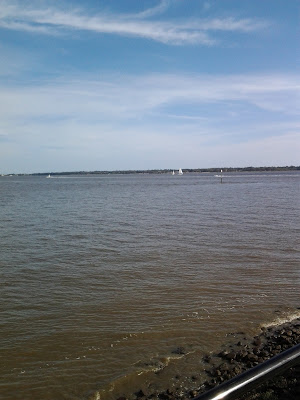 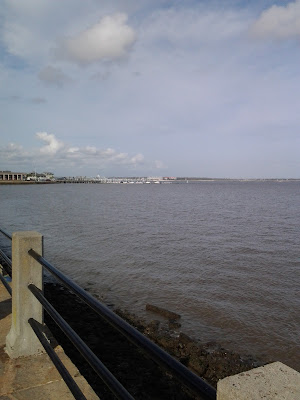 And the adjacent White Point Garden. 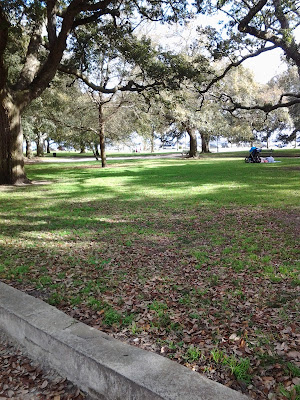 Then we headed back to The Market area in search of food, because Dear God in Heaven, Man-Child likes to eat every four hours or so.  I would have gained at least ten pounds in those two days if it hadn't been for all the walking that he forced upon me, so maybe he was actually doing me a favor.

Along the way, we stumbled across Philadelphia Alley.  I loved it.  But didn't realize the full story behind it until I went searching for link that gave the history behind it.  All I knew was what I had read on a plaque set in the wall - that after a fire the alley was named in honor of the aid it received from Philadelphia.  But according to that link up there it is also known as Dueler's Alley, as it was deemed the perfect place to duel.  Interesting.  I knew I should have booked a tour during our trip.  But Man-Child didn't want to be tied into a group.  Maybe next time. 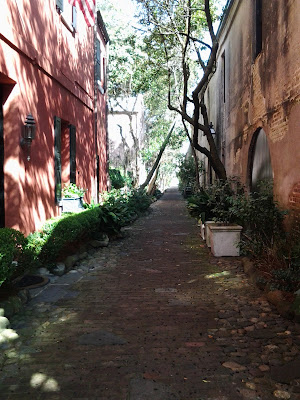 It should be noted, that according to our very informal research, it seems that just about every building we came across had been burned down at least once.  With the exception of the The Powder Magazine, which is kind of remarkable when you think about it.  It is considered the oldest public building in South Carolina and it was where gunpowder was stored.  This was also the only museum MC had any interest in visiting.  During our tour, we read eventually the idea that lightening could hit the building and pretty much blow the whole city up finally dawned on someone, so they stopped using it to store gunpowder.

As we continued on our in our quest for food, we came across the newer looking church on a quiet street.  What caught my eye was the memorials at the foot of the church and the note posted on the marquee that said, "Thank You For Your Many Acts of Kindness." 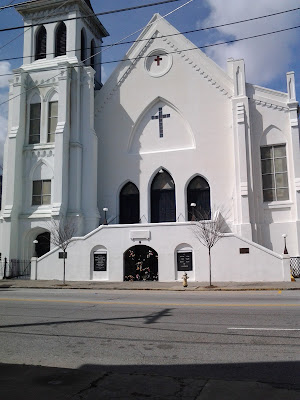 And immediately I knew.  This was Mother Emmanuel AME Church.  This is where people of faith welcomed a stranger into their midst and kindness was repaid with an evil deed.  As I stood looking at that church, I was reminded that if evil could happen here in this beautiful structure and city, it can happen anywhere.  And I was saddened to again be reminded that this is the world we live in today.

After sending up a quick prayer, we walked away both pondering our own sober thoughts.

We finally settled on a place to eat and had a nice meal accompanied by lots of people watching.  The restaurant we chose had those large, garage door style windows that were open.  We were seated at one of the windows and we had the dubious pleasure of hearing the live music that was occurring on the patio of the bar just down the street.  I can say without a doubt that he was the worst singer I have ever heard.  But, I gave him points for trying and for his unbridled enthusiasm.

In our room that night, I determined that there had to be an easier way to get home.  So I pulled up directions on the computer and realized that yes, there was an easier route.  And?  According to the directions it wouldn't take us much longer than the route that utilized the back roads.

Sunday morning, we were up and out early as we not only had a four and a half hour drive ahead of us, but then MC had to hop in his car and drive another two hours back up the mountain.

As expected, MC promptly fell asleep when we got in the car...well, to give him some credit he waited until we were about 30 minutes into the trip before he was out cold.  Using the new route, I didn't get lost ONCE.

All in all it was another successful trip.  And although it was the last official "Spring Break" trip, I'm sure it will not be the last of our adventures together.
Posted by Gigi