I've been married for twenty-five years...you'd think I'd know not to make such a rookie mistake...

It all started innocently enough...I mentioned, in passing, to The Husband that the laundry closet door was wonky.

You'd think I'd know better.  Particularly after the recent incident.  The one where I mentioned the light in the laundry closet was blinking.

That particular incident resulted in a trip to Home Depot to purchase a new bulb.  Which worked for about an hour.  The Husband then determined that a new ballast was in order.  Only He decreed that it would be cheaper to replace the fixture than it would to replace the ballast.

I will freely admit that he was correct regarding the cost, so I acceded to buying a new fixture.

Which then led to an afternoon of him creatively cursing and otherwise making me crazy.

Eventually, the new fixture was up and seemed to be working.  But my brand new dryer now sported a big dent, which made me pretty unhappy.  Until...

Three days later when the fixture up and stopped working.  The creative cursing was raised to a new level.  He fiddled with it some more and eventually....it kinda worked.  "We" have decided a new light fixture is in order.  A bigger one, of course.  (Actually that was my idea since the "new" light fixture turned out to be much smaller than the original one - because...hello?  Who knew that actually measuring prior to buying should be a thing.)  AND it will be a regular fixture, not a fluorescent so we never have to worry about ballasts and new fixtures again.  The light goes out?  Just put in a new bulb and done!

After today, I have determined that the whole light fixture issue can be put on the back burner.

Because today, while glancing at the laundry doors, I noticed that they weren't level and kind of wonky and I said (without thinking...obviously) that these bi-fold doors weren't right.

This lead to The Husband looking at the doors.  Monkeying with the doors.  Somehow removing the doors.  And eventually trying to replace the doors.  And lots and lots of cursing - the creativity of said curses was actually kind of amazing.  This activity spanned at least an hour and half; finally ending with him spitting out, "You can call someone to fix this #*%$!@& door!"

Now this is what we are left with... 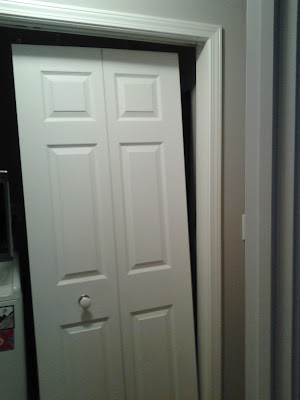 AND we now have to touch up the paint on the wall and the entire trim around the door needs to be re-painted.  *sigh*

Remind me...WHY did we want to be homeowners again?
Posted by Gigi