Man-Child will be 23 this year and the life lessons keep on coming...also - men and women; two TOTALLY different species

Our schedules are all varied lately.  I leave extra early, The Husband is next to leave and Man-Child is the last to leave the house in the morning.

After I left this morning The Husband left a note asking Man-Child to start the dishwasher; he complied.

When I came home this afternoon, I opened the dishwasher to discover bubbles; I knew immediately what had happened.  I asked Man-Child (whose current schedule not only has him leaving the house last but also has him coming home first - I find this extremely unfair...but there you go, life IS unfair) exactly WHAT he had put into the dishwasher.

He pulled THIS out from under the sink... 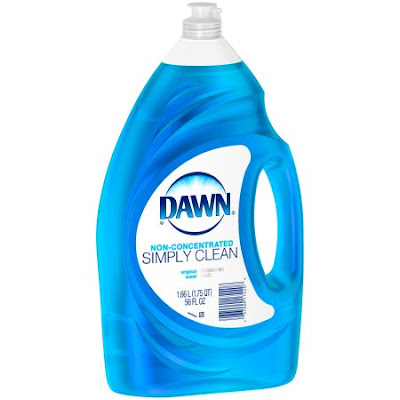 Oh yes, he did.  I was actually surprised to note that the bubbles seemed to be contained IN the dishwasher.  We've all seen the stories and pictures that abound on the internet of what could happen if you mistakenly use this instead of dish detergent.

Man-Child claimed that the bottle said "Dishwashing Liquid."  And he's right, it does.  But the difference between Dishwashing Liquid and Dishwasher Detergent is huge.  Also, to his credit, he hadn't realized that we had switched from liquid detergent to the pod-type detergent, so he figured this liquid under the sink was THE liquid to use.

If you've never encountered this kind of mess, here is what Google tells you to do...wipe out as many bubbles as you can, pour some vinegar over the rest and run a cycle or two.  Then re-wash your dishes using detergent.

When The Husband came home and was questioning why there were soapy towels in the kitchen, I explained what happened and he said, "Oh, so THAT'S what the foamy stuff was on the floor."  I looked at him completely flummoxed.  HOW does one walk into the kitchen, notice bubbles on the floor under the dishwasher and NOT investigate?!

Apparently, he just wiped them up, picked up whatever it was he'd forgotten and walked out.  And that, my friends, is the difference between men and women.