The cake that didn't want to be made...twice!

The reason we hadn't celebrated MC's birthday yet was because getting him here to actually do so has been impossible with his schedule of late.

At any rate, I planned to make a praline cake - yes, not a traditional birthday cake, but a cake that Man-Child loves.  The Husband, who typically doesn't eat many of the sweet treats I make, scoffed at that cake.  I offered to make something else but he said no.

Then, as I pulled out my recipe binder, I remembered I had his mother's recipe for his all time favorite dessert; the one he always requested for his birthday when he was younger - and just like that I was making two desserts.

With relatively no issues, I whipped up the base for the "pudding pie" for The Husband and set about to making the praline cake while it cooled before finishing it up.

Truly, I can't even call this recipe "baking" as you use a boxed cake mix but it is - usually - incredibly easy.  I am sharing it here both because I think some of you might like it and because it will help to explain what happened in both instances.

Heat oven to 350.  Mix pecans, brown sugar, butter and corn syrup in small bowl, with a spoon.  Spread on bottom of un-greased rectangular pan.  Prepare cake mix as directed on package.  Pour batter carefully over the pecan mixture.  Bake as directed on package (35-40 minutes).  When done, run a knife around the edges of the pan to loosen; immediately turn pan upside down onto heatproof serving tray or wire rack.  Leave pan over cake for about 5 minutes; remove pan.  Serve warm or cool.

When the praline cake was finished baking, I pulled it from the oven, ran the knife around the edges, and prepared to turn the cake upside down...

I threw the ruined cake in the trash, cleaned up the sticky, gooey mess and headed to the grocery for supplies - this cake was going to be made come hell or high water.

Upon returning home, I started the whole process again.  While the cake was in the oven, I finished off the pudding pie.  And, in the event that anyone wants that recipe, I'll share it here.  Also, not really baking.

Beat together cream cheese, powdered sugar and Cool Whip.  Spread over the cooled crust.  Mix up instant chocolate pudding and milk.  Spread this mixture over the cream cheese layer.  Spread the remaining Cool Whip over the last layer.  Grate the chocolate bar over the top.  Refrigerate for four hours or overnight.

As I was finishing up the pudding pie (which The Husband was delighted to see), The Husband was hovering around the kitchen waiting for me to finish so we could go to lunch.  And, as he told me repeatedly, he was starving.

As I pulled the cake from the oven, I thought it seemed a little jiggly but the toothpick I had used to check for done-ness came out clean.  The Husband flipped the cake for me, as I had told him about the first cake.  In my rush to wrap up this process, I neglected to leave the pan over the cake for the required five minutes.  Turns out, this step is pretty crucial to the recipe.  It doesn't ruin the cake, but it helps to firm up the topping (which was in the bottom of the pan).

We left for lunch, only to come home to discover that a lot of the praline "juice" had run off the sides of cake - once again leaving a sticky mess on the stove top. *sigh*  And, even worse...the center of the cake had collapsed!  Despite the toothpick being clean, the cake clearly could have done with another ten minutes in the oven.  Luckily, it was only that one, small part - the rest of the cake was fine.

You know what is next to impossible to photograph?  The collapsed part of the cake.  The topping serves as a fine camouflage... 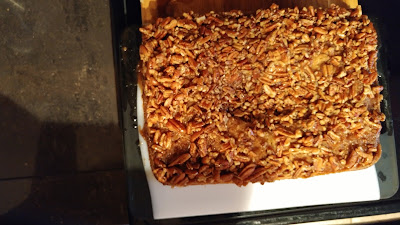 This angle kinda shows the collapse...but also shows what happens when you neglect to leave the pan on for the required five minutes. 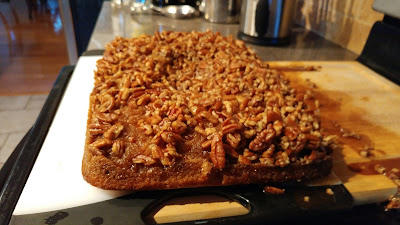 At this point, there wasn't time to make it again, so I called it "good enough."  I also neglected to take a picture of the pudding pie...I am clearly failing as a "food" blogger. ;-)

Despite, the collapse, this cake was a clearly a hit.  Man-Child took the rest home and will, hopefully, share with his roommate...but I have a feeling he may hide it.

The pudding pie was also well received, I did notice that The Husband didn't offer to send any of it home with MC though...
Posted by Gigi

Email ThisBlogThis!Share to TwitterShare to FacebookShare to Pinterest
Labels: Gigi's Been Baking