I have been trying really hard to find the Christmas spirit - but I gotta say shopping or errand-running in monsooning weather makes that hard.  As does being boxed in to a parking spot - not once, not twice but FOUR times in ONE day - since the line of cars refuses to let you out...unless, of course, they want your parking spot.  Or the rude and inconsiderate shoppers that elbow you out of their way.  Or the fact, that my tree STILL wasn't up.

To be honest? By the other night (and again last evening), I was fed up.  As evidenced by this Tweet...

If I don't get the damn Christmas tree up this weekend then it won't go up at all!!

The problem resides in the fact that I need other people to move a piece of furniture first. As the mom I'm supposed to pull off the magic but when other people are involved it becomes tiresome.
— Gigi (@gigirambles) December 15, 2018


And that, pretty much sums up where I was last night.  Done.

I had asked Man-Child to help his dad move the heavy chair when he was here on Monday night.  Apparently, they forgot about it.  Which was understandable as there was SO much going on with the ridiculous amount of snow and The Husband being sick (he's a bit better - we'll give it few more days and see if those antibiotics kick in).  I had assumed that we would see MC at some point early this weekend.  He had a wedding to attend that I wrongly assumed was in Raleigh...turns out it was in the mountains instead.  I knew I couldn't help the sickly husband move the chair (the darn thing weighs a thousand pounds...what? No, I'm not exaggerating!)  Once I realized that MC wouldn't be coming here, I had decided that this would be the Christmas without a tree!

Because, although I would like the tree to stay up after the new year, I know me.  I would rather have that tree down and out of the way before I return to work on January 2nd.  Otherwise, that tree could possibly remain standing until July (ok...maybe I tend to exaggerate a TINY bit...).  But seriously?  What would be the point of putting up a tree next week only to take it down the next?

The Husband, sensing my frustration called our neighbor two doors down (I'm thinking I should give them the acronym of ONTDD...nah) and asked if he could help.  He was willing and able.

And saved our Christmas.  Because, I wasn't kidding...if that tree didn't go up this weekend, it wouldn't go up at all.

As soon as our neighbor left, The Husband immediately put the tree up - which I then trimmed this morning.  That coupled with the return of the sun, lifted my mood immediately. 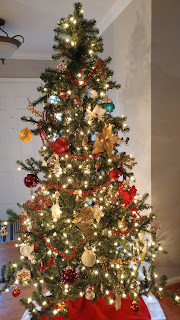 Sadly, our angel decided not to light this year - you'll note she's missing from the top of the tree.  I have The Husband on a mission to find fuses - I'm hoping to save her.  But have resigned myself to the fact that we may have to replace her.

But as I stood in the garage and looked at the TEN storage bins of Christmas decorations, I declared - out loud, so it would count - that this is the year I finally wade through and start donating.  I have said it every year (but not out loud) since we downsized but the task is a daunting one which falls by the wayside with the decorating, shopping, wrapping, etc.

So I did a quick run through of all the boxes and was able to fill three grocery bags.  Later this afternoon - after discovering that my favorite lighted garland had also decided to die filled eleven more bags of things - bringing the total up to fourteen bags - including non-lighted garland, linens (SO MANY linens - linens I'd forgotten I even owned!) and knick-knacks.  All of this will be hauled off to Goodwill bright and early tomorrow.

As of today, I believe I have finished my shopping - except for the hunt for lighted garland for the porch and, possibly, a new angel.  I have one more package to wrap after it arrives tomorrow.

I have given up on the thought of getting Christmas cards out this year.  I had good intentions as we took family pictures over Thanksgiving - but unfortunately, NONE of them came out with a high-enough resolution for cards...so I have set that chore aside with absolutely no guilt.  Maybe next year.

So, finally...I am getting there...and finding that Christmas spirit.  Some years it takes a little longer than others, but eventually it always shows up.
Posted by Gigi