Not much has been going on around here, I suspect the same is the case for most of you.

We did have a scare in that the friend two doors down had to be tested for COVID-19, luckily it turned out to be allergies.  Other than that, life around here looks pretty much like it did the last time I posted - consults calendar - almost two weeks ago.  Wow, time really DOES fly when you are stuck at home!

Man-Child came for a socially distanced visit for my birthday - also almost two weeks ago - and caught sight of one of the last finished samplers from my project, "Learn To Cross Stitch" that was in the "Going To Goodwill" box, promptly fished it out and proclaimed that he wanted it.

Color me shocked.  He WANTED a stitched sampler?!  Apparently, yes, he did.  He thought it would be perfect for his kitchen.  So, I offered to frame it for him - which he readily accepted.

I ordered the frame and mat from Michael's for curbside delivery.  As I sat in the parking lot waiting for the delivery, I people watched.  All of the customers entering the store were masked, which I - and I'm sure, the employees - greatly appreciated.  But I also noted, I was the only customer taking advantage of curbside delivery.

Based on subsequent curbside deliveries, I'm fairly certain I'm about the only customer taking advantage of it at most stores.  Why?!

I imagine that the employees at Michael's and other stores, NEED to be there for the income.  But I also imagine that those same employees would rather we, the germ carriers, didn't come in if we don't have to.  I know that if it were me, I'd rather deliver the merchandise to a waiting trunk than to watch many people wander in - masked or not - touching ALL.OF.THE.THINGS!

I framed the sampler for Man-Child - which I still don't quite understand why he wants it. 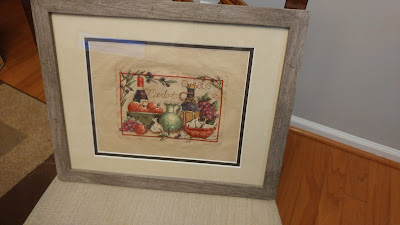 I realize that I can see the errors that I made and they are, most likely, not noticeable to anyone who didn't work on the pattern.  But I am pretty happy with the way it turned out.

In fact, based on the way that one turned out, I turned to the more ambitious project that I had set aside, after ripping out ALL the stitches twice.

I'd say I'm a third of the way through this one.  And here's what I have discovered - after ripping out ANOTHER set of stitches - odds are good that your original stitches are fine.  Look to the most recent stitches for the error.  I discovered this AFTER the fact, of course.

Also?  This may be my last sampler for a good long while.

The learning of patience was a lesson I needed - but I also find that an unfinished project finds me spending time on that project even though there are other things need my attention...like house cleaning, laundry, etc.
Posted by Gigi