Hell has frozen over....

Yesterday, I received this text.... 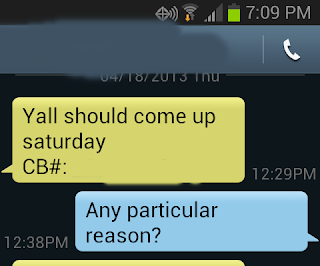 Until I received the answer.... 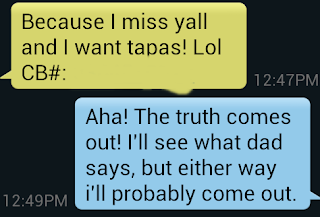 I never said I raised a dumb child.  No, he's smart this one.

As I have obviously agreed to go (how could I not; particularly with everything that is going on?  I really need to hug my boy right about now), he then went a bit further.  Much further than I EVER expected from my reticent child; when he followed up with a phone call today - wherein he asked me to stay over - in his dorm! - AND maybe meet some of his friends.

You could have knocked me over with a feather.

Usually, when I'm asked for a visit, it's just for the day - mainly to treat him to a lunch out - and then I am sent merrily on my way. Nicely, of course, but still....

While it remains to be seen as to whether I'll stay the night, you can be SURE I'll take him up on the offer of meeting his friends.

Although my friend, Kathryn, has given me EXPLICIT instructions on how not to embarrass him....


@gigirambles HA! I know. You must practice severe restraint. No hair tussling...no licking your thumb to wipe anything off his face.
— kathryn(@RollToMe) April 19, 2013

Email ThisBlogThis!Share to TwitterShare to FacebookShare to Pinterest
Labels: #still praying for Boston #the news is horrifying #I really need to hug my boy