*dear God in heaven...I have been writing this post since before Easter!  At this rate, it may get published sometime next year!*


Although this house is nowhere near ready for me to show off...I figured I'd do it anyway.

All the "before" pictures were pulled from the listing website - so this is what the house looked like with the old owner's things and color schemes.

While I do like terra cotta - I had it in my last house - this color was just too orange for me.  Particularly with the oak floors.


This is pretty much how it looks today...minus the Easter eggs in the tall glass vase.  I still need to find a home for the things on the bottom of the table and I'm not quite finished figuring out the shelves above the television (which is a bone of contention in this house. I am of the opinion that we could use a smaller television in this space.  Can you guess what The Husband's opinion might be?).  And, can we talk about those shelves for a moment?  I don't like them.  I have told The Husband that they need to go and we need to do something that looks more "built in" (like in the picture below - which is not my house but an image I "pinned" from Pinterest.)  At any rate, we ended up going with Benjamin Moore Smoke Embers for most of the house and although I like it a lot, if I had to do it over again, I'd go just a titch darker...maybe Baltic Gray.  But still a major improvement over the orange, I'd say.

Once I obtain a new rug, maybe some new curtains and definitely a smaller chair than the one that is crammed in up there I have a feeling this room will feel much bigger to me.  The rug we currently have is very earth toned and doesn't play very well with the gray.  For some reason, the brown furniture seems okay with the gray but the earth toned accents do not.  Maybe that's just me.


Let's head on over to the kitchen, shall we? 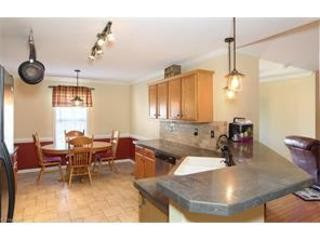 I knew, without a shadow of a doubt, that the burgundy HAD TO GO, particularly since the top half was going to be painted in Smoke Embers.  This was another one of those "Make a decision NOW!" kind of moments - which, to be honest is probably best for me as otherwise I would stick a thousand paint chips on the wall and study them for MONTHS (true story.  Our second house had a thousand and one chips on the  wall for nearly a year before I finally broke down and picked a color for the hallway!).  I'm also not thrilled with the counters.  They seem to be some kind of greenish, solid surface something....but they are like shower tiles or something.  The grout in between the tiles is worn away in some areas, which makes wiping the counters off a major pain.

Once we got rid of the beige and burgundy, I found that the greenish tone in the tiles was muted a tad and that the floor didn't seem AS brown/tan.  We ended up going with Glidden Silversmith Grey on the bottom half.  Considering I picked that color out at the very last minute, I must say I am very pleased with it.

The plants are there only because at this point in time that's pretty much the only place that isn't a bathroom or Man-Child's room that gets a decent amount of sun.  Eventually, some of them will be relocated outside for the spring/summer.  Currently we have two different pieces of furniture tucked into the corners of the kitchen.  If When we expand the living room, the large buffet piece (that you see a corner of in the above picture) will be relocated and we will add a small cart or something in the middle.  Until we decide what to do about the kitchen.  It's a decent size but the configuration is off. 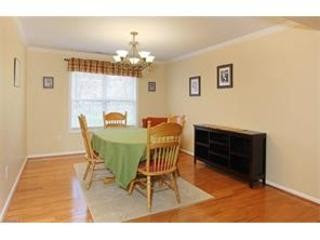 Yes, that IS the same table moved from the kitchen into the dining room for photo purposes.  Apparently, the previous owners used the dining room more as a play area for their children.


We, on the other hand, have opted to use this area to dine in.  And when we aren't dining in here (which is 97% of the time) it turns into a computer area / place to store our papers that need to be filed or shredded.  I have almost come to terms with the fact that our dining area will never be clear for any length of time.  Notice I said, "ALMOST."

The Master Bedroom.  Remember how I worried about the teeny-tiny living room?  That was nothing compared to this room.  This was the room that challenged me the most.  Despite the fact that the bed shown above is a king size and ours is a queen, we were unable to situate the bed in the same manner.  Considering our bed has a headboard and a footboard we couldn't close the door if we went with this layout.  So we had to situate our bed on another wall.  And even then we couldn't accommodate both the nightstands and the two dressers.  More on that later.


So what did we end up doing with the extra furniture?  Well, the other night stand is currently hiding out behind the door.  And the two dressers have ended up in my "closet" aka the "extra bedroom."

My closet was supposed also house a daybed, futon, sleeper couch or bed for any overnight guests we might have.  The addition of two HUGE dressers squashed that idea immediately.  So, as Man-Child has so astutely pointed out, my "closets" keep getting bigger with every subsequent move...poor me.


This room is pretty much the same as we chose not to paint it at this time since the paint is in pretty good shape.  I'm sure it will get a makeover eventually.  The only reason I even brought this room into the mini-tour was because of this....


Despite me repeatedly closing that door to The Husband's closet, it has pretty much stood gaping open since the day we moved in.  Now, if that door swung inward, it probably wouldn't bother me as much.  Since it swings outward, it drives me crazy.

Finally, one day I asked The Husband, as nicely as I could, what he had against shutting that door.  He responded with, "Well, if it's bothered you so much why didn't you tell me?"  To which I replied that it did.  And he promised to keep it shut....

The above picture was what the room looked like before it became my closet. 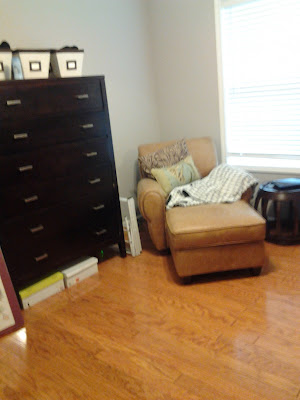 According to our painter - much to his surprise - the pink was actually harder to cover than the orange!  Even though we bought the paint with the primer.  And after posting this picture, it suddenly dawned on me that if I am doing a mini-home tour I probably should have taken more shots of each room, since this picture only shows the one dresser crammed in here.  The other long dresser is on the opposite side of the room.  Well, there's always next time. 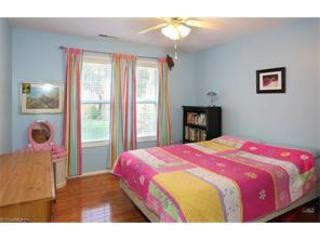 The above picture is now Man-Child's room.  Because it is Man-Child's room; it is a disaster zone.  Hence, no after pictures here!  And, I can almost guarantee that this room will never be photographed as long as he is living here!  For some crazy reason, he has insisted that his bed was shoved up against the wall.  That boy has absolutely no decor aesthetic.

There's a few other areas that I've neglected to photograph/share...but they really aren't ready for public consumption yet.

You may have also noticed that, for the most part, the walls are still pretty bare.  That would be because I am still playing with wall art.  Most of my stuff just doesn't seem to "right."  Some of it can be (and has been) painted.  Unfortunately, other pieces can't - so I am slowly searching for replacements.  As I only want things that I love the search has been VERY slow!

I am SO excited about the possibilities that the yard brings!  The original owners did a "We plan - You plant" arrangement with a local, expensive nursery.  And it's really nice.  Unfortunately, the previous owners did not seem to be gardeners...or even yard proud.  But we are making headway.

And as of right now - my back porch is beckoning.
Posted by Gigi