That ambitious project? Yeah, I'm throwing in the towel for now and other random bits.

I've had fleeting thoughts about posting every single day since my last post; but by the time the rubber hit the road, I was just too tired to even try. And then, inevitably, the following day I had forgotten all about it. *sigh*
You would think in the middle of this pandemic, with absolutely nothing going on; I would have figured all this out by now. Sadly, I have not.
But the reason I am here to today is to tell you that I've finished that "ambitious" cross stitch project . Break out the champagne. Or not.
As I was nearing the end of the project, I realized I had made a grave mistake. Can you spot it? 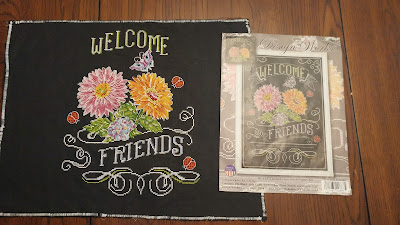 My project vs what the finished product SHOULD look like.
Astute readers will immediately realize that I stitched this entire project in the wrong orientation, thus preventing me from actually finishing the project!
I'm not going to lie.  I cursed a blue streak and then immediately thought about starting over.
I talked myself out of that crazy notion and tried to figure out whether or not I should just move the upper embellishments down.  I quickly realized that would involve more brain power than I currently possess.
So I called it good enough.  This was the one project I had actually planned to keep - mistakes and all.  Until I realized that there is no real way to pop this into an actual frame based on the size and orientation.  The white stitching around the edges is meant to help keep the fabric from unraveling; it's not supposed to show.
The Husband suggested that I could have it custom framed - I am not doing this.
Then I thought, maybe I could turn it into a pillow?  But every inch of our seating in the living room is needed and this pillow would be one that couldn't be "used."  Besides, I want our house to be welcoming and comfortable.  So, having a pillow that couldn't be used?  Not going to happen.
The jury is out on what I will actually do with this - any suggestions?
I'm not going to lie - the thought of re-doing the whole darn thing is still swimming around in the back of my brain; but for now I'm putting away my needle.  And who knows, maybe I'll find another project.  We shall see.
Other than the utter aggravation of the nonsense in the previous paragraphs - I'd like to tell you about some things that have absolutely changed my life.  I wish I were kidding, as these are arguably NOT actually life changing.
Our flatware drawer has always been an absolute hodgepodge thing which could induce nightmares for some of us (and by some of us, I mean ME).
We had one of those standard flatware organizers 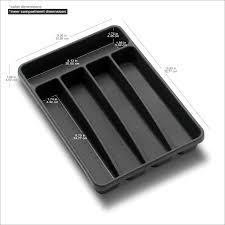 Almost exactly like this one.
The problem with this organizer was that it didn't have enough slots for our flatware.  We had the teaspoons mixed up with the salad forks.  As if that wasn't horrific enough, this organizer slid around in the drawer and half the time you'd have to yank the organizer back down to the drawer front to barely be able to reach the serving spoons that were house in that upper slot.
Sure, this is a first world problem - as in why am I even talking about this kind of first world problem.
Pre-pandemic this would have been such a minor annoyance that I would have most likely lived with it until the end of time since I only wandered into that drawer occasionally.  But since I've been home?  I'm in that drawer MANY times every single day since March 18th.
So maybe a day or two after the kitchen cabinet organization day, I found myself searching online for a better option for the flatware drawer and I came upon this... 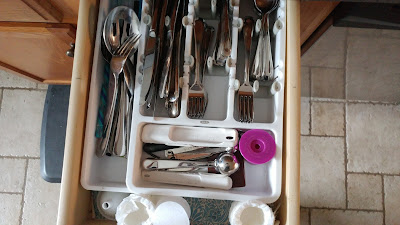 It's an expandable organizer that fits the width of the drawer perfectly, has enough slots so the teaspoons and salad forks have their own homes, the serving pieces aren't hiding in the back AND? Best of all it doesn't slide around in the drawer.
One more annoyance out of my life - I call that a win!
The other life changing item that has entered my life is the O Cedar Spin Mop. 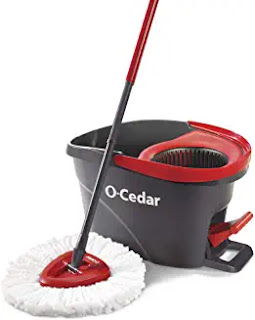 Now, I know you are all thinking at this point, that I have lost my damn mind.  And normally, I'd agree with you.  I've always hated mopping floors.  My last mop was a Libman Tornado mop.  We had a love/hate relationship.  I like that I wasn't constantly touching the mop head to wring it.  I loved that it was machine washable.  I figured this would be the mop would be my top choice for the rest of my life.  It is kind of a pain to put together and take apart.  And woe to you, if you lose that little piece that holds it all together.  I mean seriously.  I had to take that tiny piece and show it to my family, told them where it lived and threatened them with their lives if it were ever to disappear on their watch (as if they ever mopped) that's HOW important that tiny little piece was.
Until Beth wrote a post that introduced me to Go Clean Co on Instagram AND the O Cedar Spin mop and I was intrigued.  After obsessively stalking Go Clean Co.'s Instagram, I finally bought the mop.  And now, I can honestly say I don't HATE mopping (and joy! No tiny piece to keep track of!  And the mop head is machine washable AND - even more important, no tiny, little piece to keep track of! Yes, I had to mention it twice because of all the angst that tiny little piece brought into my life!).  The floor is dry in mere minutes - making it perfect for all hard flooring; particularly wood.
Unfortunately, this mop does NOT perform miracles though as our tile still looks dirty after being freshly mopped...but that is the tiles problem (they are ugly - see above picture for a snippet); not the mops.
I have also embarked on the note writing project mentioned here and have already received a reply; which completely made my day.  And, my mother in law was absolutely overjoyed with the random note she received; according to The Husband who just randomly called her.  He had no idea I'd sent her the note - but was so appreciative at how happy it made her.  Particularly, since she lives alone and the isolation has been hard for her.
So, to recap...
So here we are on the cusp of a long Labor Day weekend.  Have a great one - and be safe while you celebrate.
Posted by Gigi