My (long) weekend in pictures....because I'm really too tired for words

As most of you know, I sent my one and only baby off to college last August with many tears.

And it all began on Thursday, when I went to pick him up.  Hubby begged me to let him rent me a van for all Man-Child's gear.  I declined.  I knew he hadn't taken that much with him.  So I figured I could stuff it all into my car.

But I persevered and shoved it all into that teeny, tiny car (Luckily, his roommate agreed to take the microwave with him, since they'll be rooming together again next year.  Otherwise, Man-Child would have caught the bus home since that would have taken his seat in the car had it come with us).  Needless to say it was a quiet ride, since he was exhausted from all the exams and slept for a majority of the drive.

Upon arriving home, he dumped all the stuff in the living area of the house. 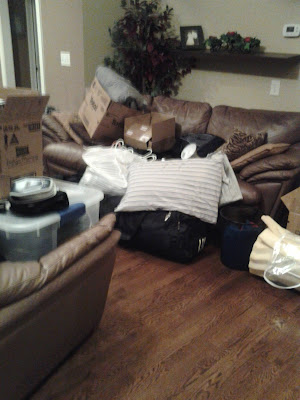 And there it stayed until I had a conniption fit last night and told my husband that the ONLY thing I wanted for Mother's Day was for this crap to be out of our living area.

And this morning, magically, it was.  Of course, I dare not enter Man-Child's bedroom now....

So today came along - Mother's Day.  The day when mothers everywhere are showered with love.  I, of course, feel nothing but pressure.  Not that my guys don't shower me with love - because they do.  But because all day long I am pounded with "What do you want to do today?  It's YOUR day.  Where do you want to eat?  Seriously mom, I'm hungry!"

One of these days I'll realize that I must be the one to plan out my entire day and then the pressure will be off.

So, in addition to feeding the boy, today we ended up going on a walk in the local bog garden; hoping to spot the most recent local celebrity.

Of course, I had to remind the guys that they had to be good role models for all the children in the area....they didn't listen.


And about the time I uploaded these pictures, I realized that my camera, the one I haven't used in forever, is obviously stuck in September 2012.  I need to get around to fixing that...maybe in 2014.

And to all my dear friends, I hope you had a wonderful, stress-free Mother's Day.

****
And to those who have wondered.  The credit issue with Man-Child isn't actually "fixed."  He has been able to manipulate the schedule next year so that he has enough hours to be considered a full time student - thus ensuring he can stay on campus.  It will take him approximately a semester to catch up.  But we can breathe a little easier now.  And we have informed him that he will catch it up because he will graduate in four years and not six.

How it happened?  Who knows.  Human error, I suppose.  He didn't realize that his physical education class only offered one credit and somehow this sailed completely over his counselor's head.  Whatever.  This is what I consider a "life lesson" for him.