The Invisible Box (or, more appropriately...Apparently, my insanity knows no bounds)

As you know, we are going to show the house tomorrow.  This, of course, led to a major cleaning frenzy today.

In the course of said frenzy, my eye happened to fall on this box. 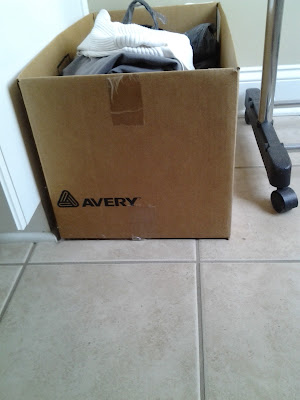 Now this little box sits in an unobtrusive corner in my laundry room and is used to hold items that need to be taken to Goodwill.  You know, like *that* pair of pants that looked, oh so cute, in the store but in reality made me look like an Oompaloompa.  This little box is also apparently invisible to everyone in the house except for me - as I am the only person who ever seems to deposit anything into the box, unless I force them to at gun point. (Yes, I live with hoarders, people).

As I continued on with the cleaning frenzy, that little box remained in mind.  Why?  Because I had decided that the little box needed to be prettified AND it needed to happen before tomorrow - you know, just in case the little box isn't actually invisible to everyone but me.

So I pondered - yes, PONDERED - over the best way to make the box pretty.

And I came up with the solution of covering the box with Contact Paper.  Yes, I could have used pretty gift wrap - but since I had pondered over this little box for far too long - I had decided that gift wrap just wouldn't hold up as well on a box, that sits in the corner, and is only used by me.

So I made a special trip to Target to procure "pretty" Contact Paper to cover the invisible box and came home and set to work.  Now, as anyone who has ever used Contact Paper to line their shelves knows, it is not the easiest medium to work with.  Throw a box with corners into the equation and you are talking EXTRA tricky.

But I did it; and now my invisible box is pretty. 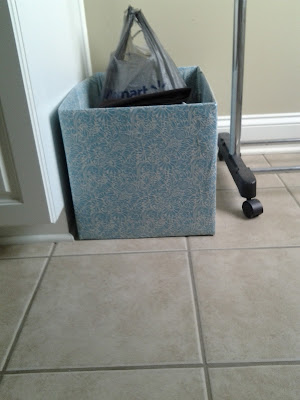 And as if spending half an hour wrapping a box - that no one but me sees - wasn't enough.  I decided it needed a label, just in case that box isn't invisible to everyone else, so that they would know the purpose of the box.  So I headed to the computer, created said label, printed it, cut it out and slapped it on. 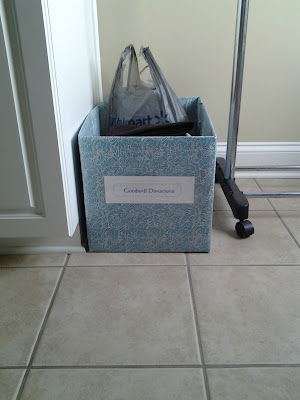 And there you have it.  I am now the proud owner of a pretty little, invisible box that proudly states its purpose.

As if you needed further proof of my insanity.