If he'd read the directions first - it would have never happened

Do you know what this is? 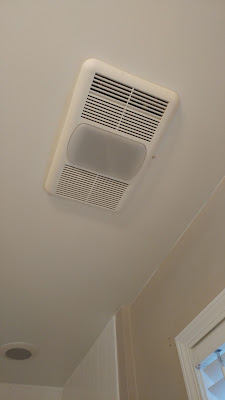 No, contrary to what you may think, it is NOT an ordinary bathroom vent.  It is actually a symbol of my husband's undying love for me.

I know what you are thinking - "Well,what do you know - she's finally lost her marbles.  I knew it was only a matter of time."

I'll have you know that all my marbles are still intact, thank you very much.

It all started a few days ago when the temperatures here dropped drastically.  For some reason, the master bedroom/bathroom - but particularly the bathroom - are at least ten degrees colder/hotter than the rest of the house; depending on the season.

So when the temperatures plummeted, I asked The Husband how difficult would it be to install a vent/heater combo in the bathroom.  We had one at the last house, which is the only reason I knew this was an actual thing and not a daydream.  He responded that he didn't think it would be a difficult thing to do.  Which then prompted me to ask him to install one as I was getting tired of the unbecoming blue shade that I acquired after spending the time in there getting ready for work in the mornings.  He never really responded.

This morning he informed me he was headed out for a walk.  I thought it was his way of getting out of the house as I wrestled with the cookie press; after all these years he knows when it's time to make himself scarce.  The next thing I knew he was walking in the door a couple hours later with a big box containing the vent/heater combo.  Apparently, he'd hit Lowe's Home Improvement after his walk.

He then proceeded to unbox the item and went and looked at the old vent.  About this time, I decided it would be prudent for me to take all the goodies to the office in order not to have to worry about getting them there in the morning.  You see, after all these years, I've also learned when it's time to make myself scarce.

When I came home about an hour or two later, I walked into the bathroom to discover a pile of insulation on the floor, a gaping hole in the ceiling and The Husband beyond aggravated.  He informed me that we needed a bigger breaker for this contraption - something he doesn't feel comfortable doing himself - but figured he'd attempt it after getting the vent/heater in - yes, at this point it still was sitting on the floor.

I suggested that he take a break and that we grab a bite of lunch.  He agreed.

After lunch he headed back to the bathroom and I headed toward my closet/room/studio/whatever to finish wrapping a couple of gifts.  This is when we learned that no matter how loud my husband can be - and believe me, he CAN be loud - when we are on opposite ends of the house I can't hear him.  As I was finishing up the last gift I heard a faint noise and thought I'd better go check on him.

When I arrived he said, "About time!  I've been calling you for at least ten minutes!!"  as he was standing on the ladder holding the new contraption trying to keep it from falling.

Ooops.  Lesson learned, when The Husband is involved in a project, it's best to stay within earshot.

Another lesson learned - when The Husband is involved in a project that's in the ceiling - it would be prudent to have a taller person than me on hand.  I ended up standing on the toilet, on my tiptoes, trying to hold the contraption while he finished connecting whatever it was that he needed two hands to connect.  Eventually, he was able to connect it and shove it up into the hole in the ceiling.

At this point, I figured I'd best stay in the area.  He finally succeeded in getting everything situated just right and was able to finish the project - minus replacing the breaker.  At this point, he'd spent approximately four hours on this project and was done.

I helped clean up the mess and told him how much I appreciated this "easy" project.  And he informed me that had he read the directions before he started (he didn't, he never does.  His preferred method of madness is to jump right in and only when he gets stumped does he stop to look at the directions) this project would have never been done.

Apparently, one of the first things the instructions said was "you will need access to the attic above the space" - which we do not have; if we had, this project probably would have been as easy as he thought.

And that, my friends, is why that humble vent is a symbol of his undying love.  Because he did it for me and suffered untold aggravation to get it done.