When we last left off, I had just finished binge reading book while mindlessly dropping pistachio shells into my drink...

I also forgot to mention that I took today and tomorrow off just because.  Occasionally, one just needs a four day weekend for no real reason at all; so I did.

Yesterday found me ready to wander out into the big bed in the back yard for just an hour.  Yeah, right.  That easily morphed into two and a half hours, thanks to (say it with me now!) "that damn blackberry bush" and a new-to-me weed that seems to be immune to Preen.  And I'm still not done.  But the rest will have to wait until next weekend, I'm afraid.

At any rate, today - the last day before I head back to work - I decided to make it a more relaxing kind of day...so I decided to tackle making bread...again.  Although, in retrospect, today the weather would have been kinder for outdoor work.

Long time readers may recall that many, many, many years ago I somehow was able to successfully create a perfect bread on my very first attempt.  Any and all subsequent attempts have been utter failures.

Today I searched out a quick and easy no-knead bread (because I didn't have or want to spend 16 hours or more on it) and came across an adaptation of the original recipe, which that link takes you back to my original blog post; as the original is now behind a paywall, I believe.

The recipe I used today can be found here...for how long, who knows?

So perfectly that The Bread Snob (aka The Husband) has been raving about this bread...which came out of the oven right before he walked in after work. 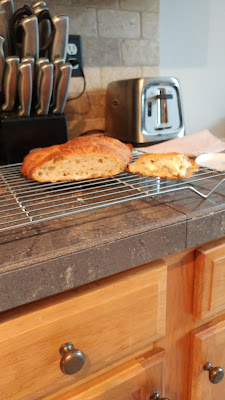 3 cups bread flour (I used regular because that's what I had in the pantry)
1 packet (1/4 ounce) instant yeast
1 1/2 teaspoon of salt (I thought that was too much so I used maybe half a teaspoon?)
1 1/2 cup of water
Oil as needed

Before anything I started the oven just to get it warm; this isn't mentioned in the original recipe, but based on other sites I read, I thought it might be helpful.  In my opinion, it was very helpful!  Particularly, since it's summertime in the South and the air conditioning means the house is cool.

Combine flour, yeast in a large bowl.  Add the (warm!) water and stir until blended; dough will be shaggy.  Cover bowl with plastic wrap.  Here's where I turned the oven off - and let the dough rest for about four hours in the warm oven.

Lightly oil a work surface and place dough on it; fold it over on itself once or twice.  Cover loosely with plastic wrap (I oiled the wrap that would touch the dough, this was key, as it kept the wrap from sticking to the dough) and let rest for thirty minutes.  (Notice, this recipe does not require you to add flour to the working surface...that was the downfall on my last couple of attempts - it made the bread too flour-y.  Using a canola oil spray was genius!)

As soon as the dough was resting for the second time,  I put my dutch oven into the oven and let it heat to 450 degrees while the dough rested.

When the dough is ready, carefully remove the pot from the oven.  Slide your hand under the dough and put it into the dutch oven; seam side up (I didn't have a seam for some reason?  Also, that oiled surface?  Made picking the sticky dough up so easy!).  Shake pan once or twice to distribute uneven dough.

Cover with the lid and bake for thirty minutes, remove lid and bake another 15-30 minutes; until the loaf is browned.  Cool on a wire rack.

If you try it, let me know what you think.  Also?  This success completely absolves me of the abject failure of the cake I made (and didn't blog about) on Saturday...
Posted by Gigi

Email ThisBlogThis!Share to TwitterShare to FacebookShare to Pinterest
Labels: Gigi's Been Baking