Boys are worthless when it comes to picking out a shoe

Occasionally, the thought will cross my mind when I think it might be a good idea to have had a girl-child.  You know, one to help me decide which shoe would be the better shoe to complement whatever outfit I may be wearing.

Because I have to tell you - the guys just don't cut it.

First off - they both have a tendency to roll their eyes and groan whenever I ask, "Which shoe?"  And if one happens to hear me ask the other - well, then that one goes into hiding because he knows that he will be asked next.


What they both fail to realize is that 9 times out of 10, I don't need a second (or third) opinion.  Usually, I'm quite capable of deciding what shoe "makes" the outfit.

But sometimes, just sometimes, I need a little help.  And the way they react, you'd think I was asking them to poke out their eyes with a pointy stick.

Such was the case this morning.  I needed help deciding between the patent loafer or the beautiful pump.

I snagged Man-Child and after telling me that this was a waste of time and I always went opposite of what he said - the pump was his choice (although we all know he just picked one so he could be set free). 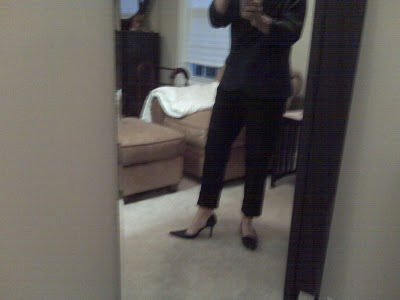 After he scurried away, I heard Hubby coming up the stairs.  When he appeared, I asked him.  After complaining that he was late, he chose the patent loafer, of course. 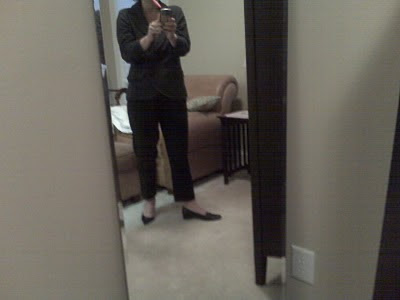 I still wasn't sure.  I was leaning toward the pump though.

Then I remembered.  Today was fire drill day.  Great.  Clomping up and down four flights of stairs.  So the pump was out . . . . but that great pair of ballerina flats hiding in the closet was calling my name.

So it was a la Audrey Hepburn that I skipped off to work - apparently, I didn't need either of their opinions after all.

*****
Thank you all so much for your sweet comments on the last post.  My dad is fine - he just has a tendency to hide things from me until after the fact; which never fails to drive me crazy.
Posted by Gigi