An update on Man-Child (and a PSA; seriously)

As I was perusing FaceBook - which is a rare occurrence for me (especially of late), I came across a couple of pictures and realized.....I kind of left y'all hanging as far as Man-Child's injury goes.

Ooops!  Sorry about that!

But seriously??  YOU should have reminded me of this!  (Why yes; I AM making this your fault!  How very astute of you to notice)

At any rate, as you can tell from the following photos....he may be down; but he is NOT out! 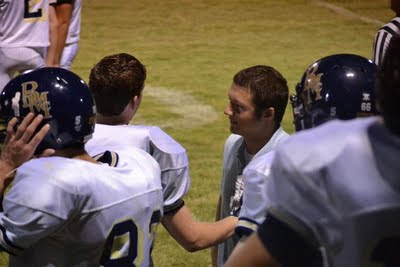 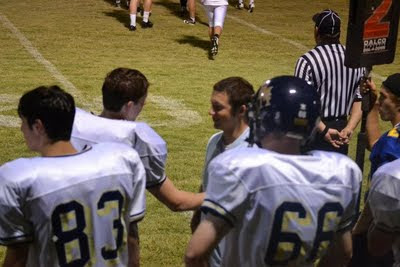 The VERY astute of you will notice that he is not wearing pads and is not in uniform.....which is to say ALL of you immediately noticed this....

But he IS at the game (which is a round trip total of 4 HOURS away!  See the previous link) and he is NOT on crutches nor does he seem impaired in any way.

Which is a GOOD thing!

After a full weekend of suffering and worrying; we FINALLY got to see the orthopedic doctor (go figure; they usually have Saturday hours but, with our luck, they were closed last Saturday because the parking lot was being re-paved that day)....(if we didn't have bad luck; we'd have no luck at all!) only to discover he has a tiny tear in his MCL (jeez, I hope I got that right!).

Which basically means - no surgery.  No permanent damage.

But the only "fix" is to "rest" it....to the tune of 2-4 weeks; according to the orthopedic doctor we met with yesterday.  Which, with our recent schedule (considering all the re-schedules to the ONE game - again see previous link - this game has been re-scheduled/cancelled at LEAST three times!) means possibly 5 games (and; if you know high school football; then you know that could be a significant amount of time to be out) that he will be sitting on the sidelines.

But considering the alternative?  I'm not complaining.  AT ALL!

Especially, considering we recently (I mean VERY recently) had a local (and I mean VERY local) player die.

The gossip was that he had a concussion that he refused to admit to - because he didn't want to sit out for requisite 10 days.

But according to the news (the real news; not the gossip) was that he was in pain (what kind, we don't know) and rather than admitting to the pain he chose to hide it.

And then chose to self-medicate - from his parent's medicine cabinet.

As a result, he accidentally over-dosed.  Another bright future snuffed out - far, FAR before his time.

According to everything I've read recently; today kids aren't dying from the stuff they can get on the street.

Today, they are dying from stuff they are finding (and sharing) in their parent's medicine cabinets.

Seriously.  If you've got stuff in your medicine cabinet that you don't need - get rid of it.  And if you need it - lock it up.

You have to remember that kids think they are invincible.

And kids who are athletes - REALLY think they are invincible.

This child was hurt on a Friday....he was gone by the next Wednesday....and his parents didn't have a clue.
Posted by Gigi