My very first thought this morning was that it is Man-Child's 17th birthday.  One of the later thoughts included one that went something like this, "Crap!  I should have started earlier and came up with a brilliant and loving tribute to the last seventeen years to post!"

But, I didn't.  I suppose I could go that route now, but to be honest, that might make me weepy.  I'm done with weepy.  These past few days have been good days and I aim to keep them that way, thankyouverymuch.

So instead of a mushy, gushy birthday post you get this instead - a post that is overloaded with pictures and a recipe.

Then, as now, if I wasn't behind the camera then pictures usually weren't being taken.  So this was the first picture I came across of the two of us.  When he was ten days old already.  I can only assume my mother took this picture since I'm in it.

Finally this morning he asked for a dessert that I made several years ago....ONCE.  Apparently, he loved it so much he's been pining for it ever since.  He's asked me a couple of times lately, for various events, to make it. But he couldn't remember exactly what was in it and I couldn't find it.

But the birthday-gods must have been smiling on me this morning; because I found the long lost recipe.  He looked it over and said that it "sounded" like this might be THE ONE.  So I set about making this birthday treat.  Along with a cake for tomorrow (when we will have our friends-who-are-so-close-they-should-be-family over to celebrate).

This has to be the easiest dessert EVER to make.  Here are the only ingredients you need

It's called Graham Cracker Eclair Cake.  I do not remember where I found this recipe.  But, apparently, it's quite memorable.

Arrange 10 of the graham squares, overlapping slightly, in the bottom of an 8 inch square baking pan, set aside

Spread half the pudding mixture over graham crackers in the pan....

Top with 10 more of the graham squares and remaining pudding mixture.  Cover with the remaining graham squares.  Refrigerate at least 3 hours.  Spread with chocolate frosting just before serving.

While I was doing all this the boys (Man-Child and Hubby) decided to go out and play pool and do "guy stuff."

After they came home, Hubby succumbed to an allergy-medication induced nap (I forgot to get a picture!) while Man-Child surfed the 'Net while simultaneously exchanging dinner possibilities with me.

Once we'd determined where we would dine we headed out to an upscale Chinese restaurant.....and no, it's not P.F. Chang's (although we love them too! I think this one is only local, so I need to keep it under wraps - sorry!  But if you come visit me, I promise I will take you there!).

After a wonderful dinner we headed home.  Where M-C immediately began pestering me about dessert.  Seriously??  How could he even begin to think about eating more food?

So, I finished off the dessert.

We stuck some candles in it (so what if it's not a cake?) and sang Happy Birthday....


Took a couple of pictures to remember the occasion....


Then he tucked into the dessert..... 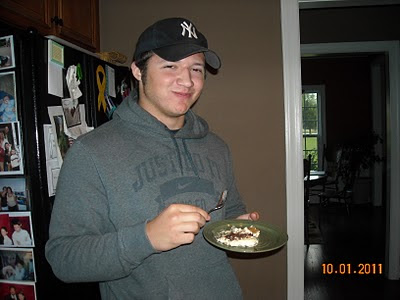 
And, according to him, it was a GREAT birthday.....before he headed to hang out with his friends.