I'm NEVER posting anything over there, unless I'm chasing down @lgalaviz (because she consistently leaves comments that NEED a response and that's the only way I can reach her) or Kathryn (because she defected from a Blackberry to Apple Country) or a host of other people.  And usually what I do tweet about is of no interest to anyone but me.

Unless, that is, you have the ability to read between the lines.....i.e., the following....

This particular tweet tells you that I had insomnia on Sunday night.  This tweet also tells you that I have NEVER experienced insomnia before.  It freaked me out on SO many levels.  In fact, it affected me in such a manner that I was actually AFRAID to go to bed Monday night; for fear that I wouldn't be able to sleep.  Me.  The one that pretty much falls asleep immediately and, woe to the one who wakes me up from my slumber.  Also, woe to the one who encounters me immediately upon waking.  I need a good hour or so and a few cups of coffee before I am fit to deal with the general population.  FYI, I ended up sleeping fine.  And hopefully, will never experience that again (you can hear Hubby in the background saying "Amen!"  Apparently, he claims, my insomnia also kept HIM up; although I do recall hearing him snore that night.....)

And then there was this one

This one CLEARLY explains that I was fighting Man-Child over the principle of "if you don't try then (OF COURSE) you won't win".  And that I'm a great mom, naturally.

The following tells you that we are both easily distracted....

And it was all because of this.... 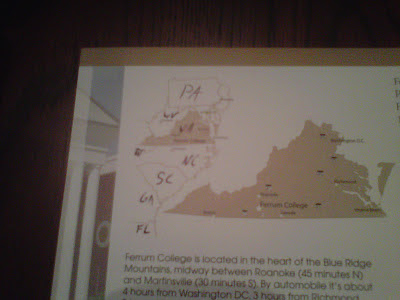 He got bored and started filling in the state abbreviations on this college solicitation brochure; which of course reminded me of 5th grade when he had to learn all the state capitals; which resulted in me asking him if he remembered them - which then led us into a game of me calling out the states and him trying to remember the capitals.  It was fun while it lasted.  And he did a pretty good job at recalling most of them; he may get into a good school after all.

This was CLEARLY a moment that had to be tweeted - for posterity.  There is no reading between the lines here.

After a couple hours of this obviously I had better things to do we needed a break.....

And this one is pretty obvious....

It pretty much tells you that if I don't sit down and write that post I was thinking of right then (or at least get it started) then it is GONE!  My brain is full of holes, I tell ya!  I lose lots of great posts every single day because of those darn holes.

The poor lamb can't quite walk, much less drive, with this monstrosity on


And they said that this WAS the short brace!  Yikes.  Hate to see the long one!
Posted by Gigi