It's Official...the house is on the market, the "Boy" is home, and I'm getting old. *sigh*

Hubby finally put up the For Sale sign - yes, we are testing the waters with a For Sale By Owner sign.  So far?  The house looks almost as good as it did when we moved in.  Things are slowly, but surely, getting done (for those who are counting, so far ALL the painting has been done by yours truly and you are welcome to picture me giving Hubby the evil eye).  Things are getting weeded out, cleaned (again, it seems like yours truly is shouldering the majority of that burden.  Probably because he is a closet hoarder) and refreshed.

And as the house begins to take shape, I'm remembering how much I love this house (stop it!); but am prepared to let it go, if that is the plan, so we can start over fresh.

The pantry has been my main goal today - it was a mess!  As you all know, I am not the cook in this house so the kitchen and the pantry is mainly Hubby's territory.  But seeing as he is a closet hoarder someone had to take charge.  It literally took the majority of the day to assess what was needed in terms of baskets, containers, etc., set about purchasing said needs, and then actually following through with the clean up, decanting, decluttering and labeling (I labeled everything in hopes that Hubby will put things where they belong.  It's a vain hope, but a girl can dream, can't she?).  I even took a picture for posterity - because I think the odds of it remaining in this condition are slim to none.  Which pretty much means, I just wasted most of my day and some hard-earned cash.

As I was collating the pasta into the containers, he piped up with "What ARE you doing?  Don't you know that those are different brands of pasta?  You can't mix them up like that!"  Are you freaking kidding me?  The pasta that I was manipulating were all labeled "thin spaghetti" (of which we had SIX unopened boxes!) which to me means they are all the same.  According to Hubby the different brands cook differently.  Who knew?  And even more importantly...why buy various brands then?  Doesn't that just result in too much info to store into your brain?  I told him to suck it up and deal with it.  For the rest of the pasta (rigatoni, elbow, penne and who knows what else) I gave up and just bought a big basket to shove it into.

And you still can't convince me that we NEED that much pasta and accompanying tomato sauce/paste.  Peanut butter, popcorn and coffee?  Yes.  Pasta, etc?  Not so much.

In other news, Man-Child came home for the long weekend. 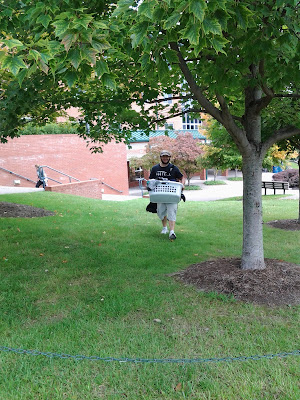 Hmmm....didn't I have a very similar picture about this time last year?


I love having him home.  It makes my little heart happy.  And he does provide perspective about certain things.  Consider what he yelled down the stairs yesterday....

MC just yelled down the stairs "you know what's great about this washing machine? You don't have to put money in it!" #Perceptive
— Gigi (@gigirambles) August 31, 2013


And, even better?  The fact that he started his laundry without waiting around hoping I'd do it for him.  Granted, I did finish it (oh hush!  I'm allowed to spoil him a little!) but he still gets major points for not expecting me to do it in the first place.

Hubby is also enjoying having him home because he now has someone to watch football with - as I type Hubby is providing color(ful) and loud commentary on whatever game they are currently watching.

Now, we can discuss the most important part of this post.  I'm getting old.

How do I know this?  Because in the last week I have succumbed and purchased readers.

I finally convinced my eye doctor that I couldn't see with my current contact prescription; and he agreed but informed me that I would probably need reading glasses. I was all "Whatever, I can't SEE!" Until I realized that the only time I can now see anything up close is without my contacts or glasses.  Do you know what this means?

As I am extremely nearsighted, this means that if I am wearing my contacts I can't see a damn thing that is even in the vicinity of my eyes.  I had become quite adept, when wearing my regular ("ancient" and definitely not my current prescription) glasses, of looking over them to see whatever it is I need to see.  But then I bought the readers - to wear while wearing my contacts when I need to see something up close.  Can you say "disorienting?"  And then when I switch from contacts to my regular old glasses (not the readers) - my eyes go into the eyeball version of anaphylactic shock.  It's insane.  I'm convinced that I am doing my eyeballs a disservice by freaking them out so frequently. But what choice do I have?  None, apparently, if I wish to see.

Until then, you can picture me with my readers perched on the end of my nose like so...


In a vain attempt to see all things both near and far.