Sometimes all you need to do is take that first step.....and then real life takes over and thwarts all your dreams

So, yesterday?  When I announced to the Internet at large that I was turning into a sloth?

Well, apparently, announcing to the world that I had become a lazy cow was the kick in the pants I needed to start getting some things done around here.

I didn't intend for it go as far as it did....I just thought if I did only one of the things from my list that I'd be satisfied.

So I did it.  I transplanted a plant.  It was such a small thing.  (Apparently, so small that I completely forgot to take the damn plant to the office this morning; which was the whole point of transplanting it in the first place.)

And then I decided to make cookies.  Partly because I had told Man-Child I *might* make cookies on Sunday and partly because I was already up off my behind.  But before I could begin on the cookies, I noticed that the kitchen was a right mess.

Oh sure.  The dishes were washed and everything looked clean.  On the surface.  But look closely at that toaster, if you would?  Notice the fingerprints?  The crumbs?  The smattering of grease that can only come from it being located too close to the range?

Well, before any cookies could be made that mess was just begging to be cleaned up.  After a thorough scrubbing of the toaster things just kinda escalated and before I knew it that kitchen was spotless again.  And Hubby may have gotten his feelings hurt.....I didn't mean for it to sound so harsh when I responded to his innocent question about what I was doing in "his" kitchen.  But it's true.  The kitchen WAS a nightmare.

From there the frenzy grew.  And now I am the recipient of a pretty clean house.  Oh no, it's not perfect by any means.  I spotted those dust bunnies cowering under the couch.  But I left them to live and breed another day....for now.  Because eventually the whirlwind that took my body over needed to stop.

Oh!  And the cookies?  Yes, they did get made.  Much to Man-Child's eternal delight.

But that feeling of satisfaction?  Of a job well done?  Of no longer being slothful?  AHMAZING!  But still....I may need to call in sick tomorrow....those dust bunnies can't wait much longer.

Immediately after typing this the top half of the shelf of our lazy susan cabinet broke.  See? 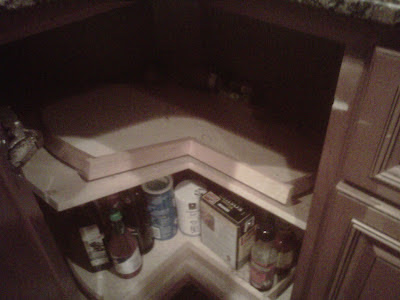 And now, the top of my once pristine, CLUTTER-free cabinets is filled with the detritus from within.... 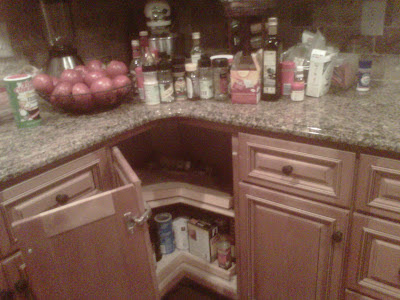 And as I continue to type, all the stuff from the bottom shelf has been unloaded and added to the countertop as Hubby tries to fix the problem.  Unfortunately, the rest of the cabinets were built around this piece - so short of ripping out the surrounding cabinets, all we can do at this point is a "make-do" kind of fix...which means it will no longer be a lazy susan.....sigh.....real life once again thwarts my dreams of having a house worthy of being featured in a magazine.
Posted by Gigi