Twenty-six days.....and some other stuff. 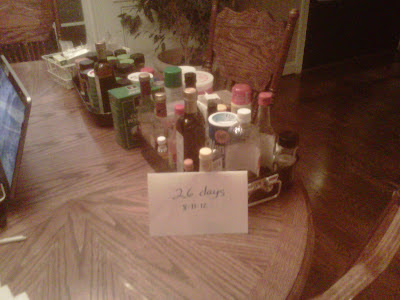 And I haven't said a word.  Not one.  Despite the fact that it's beginning to drive me crazy.

Besides - does anyone really need all those spices and things?  Yes, that very statement may explain why I am not the cook in this household.

This exercise in futility has made me realize that those damn spices are going to sit on my table for eternity.  Especially considering that Hubby doesn't read my blog so he can't take a hint that way.

In other news, Man-Child leaves us in exactly six days.  SIX.  I have been in a frenzy of trying to get ready.  And by frenzy, I mean that I have been thinking there is stuff I should be doing/buying but I haven't really done anything and have pretty much been spinning my wheels.

Currently, he has sheets, blankets, a computer and - as of today, a hamper and laundry soap.  But that's it.  I've hit a dead end.  I know there are other things he will need but I can't seem to think of them.  Maybe tomorrow will bring inspiration.

In advance of a trip to Asheville this weekend (I KNOW, how dare he leave me on the LAST weekend he'll be home?!) he actually did laundry.  Color me amazed.

I mean, he knows how to do laundry but getting him to actually do it is a monumental task.

At any rate, last night he had me watch as he then actually FOLDED said laundry - and by that I mean he determined that the best place to do his folding was on my bed as I was trying to read.  And then promptly informed me that I must be OCD when I informed him that he was folding his undies backwards and then not stacking them up properly.

I mean honestly, after all these years of receiving properly folded and stacked laundry deposited neatly on his bed for him to put away you would have thought it would have seeped into his brain.  Apparently not.

He will NOT do well living away from me.  I can already tell.
Posted by Gigi