I don't believe I've mentioned it here - but my very dear friend, who lives around the corner, is expecting.  We are all very excited for them.

Of course, when she told me, I nearly drove off the road as I had no idea they were even trying.  The last time she sprung some news on me, I was expecting her to tell me that she was pregnant.  Instead, she told me then they might be moving to Arkansas.  Luckily for all of us, that move never materialized.

I promptly offered to host a baby shower/brunch for her.  She asked me to team up with another friend of hers that I don't know to co-host the shower.  I agreed.  This person seems VERY nice but from her most recent email, I now know why my friend's husband was laughing when he discovered that me and this other person would be teaming up.

Turns out we are very different - which is fine.  Turns out our ideas on what constitutes as "baby shower activities" are very, very different.  So while she is doing her thing for her activity, I'll be doing mine.  I'm sure it will all be fine.

As I mentioned here, I have been in search of the perfect coffee cake recipe.  As of the typing of this post, I am currently on my THIRD test cake...yes, I know. I'm insane.  It also appears that I mentioned the baby shower earlier than I did the baby, that I am SO very excited about - if this kind of thing keeps happening, I will be asked to turn in my blogger card...

At any rate, I think I may have found the perfect recipe - until I got home and started pulling it together...seems I didn't have any sour cream or enough butter.  I had to ad lib the whole thing.  We shall see how it turns out.  At this point, I have told myself that if this cake turns out to be tasty then the recipe done correctly will be fabulous.  That makes total sense, doesn't it?

This is why I shouldn't bake in the evenings.

Although, I just peeked in on it...based on looks and smell this one may be the winner! *crosses fingers*

So now that I've reported all the mundane news...on to the bigger news.

So, my very dear friend, that lives around the corner, she and her husband have been in mild state of panic about their house.  Even before they discovered they were expecting.  You see, her husband has declared that their house is too small for their family.  He kept nattering on and on about moving (further) out into the country.  She, on the other hand, was adamant about staying in the neighborhood and keeping the children in this school district.  They were at an impasse - so the husband began to reluctantly discuss expansion.

Then the house across the street from us went on the market.  They wistfully talked about that house but it was quickly snapped up.  I've since been inside that house and I don't think they would have liked it anyway.

About two weeks ago, a Coming Soon for sale sign went up two doors down and I knew this one was going to go FAST.  I texted my friend.  She came by to get a peek at the outside and saw some possibility.  Once it went on the market she made an appointment and loved it.

We were discussing the house but she didn't seem ready to jump.  I don't blame her - what with her due date being a little over a month away.  I figured that was as far as they were going to take it.

Me, being me, I kept an eye on the house and sure enough, the house was already in due diligence yesterday morning.  I sadly reported this info via text to my friend. She came back with "Wow.  That was fast.  How do you know?"

I informed her that I still receive an MLS report every day.  And she responded with, "Well, smart people I guess.  Probably took a leap of faith with encouragement from a good friend. ;-)

And then I realized, THEY had made the offer and it was accepted.  There was much rejoicing in this house last night, I can tell you.  Because although they are only around the corner, two doors down is MUCH better.  Especially with a new baby!

And that coffee cake?  Well, it looks promising... 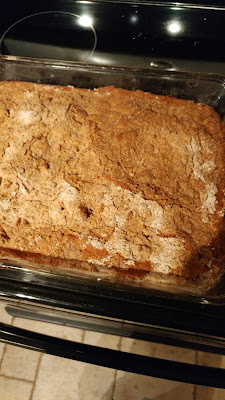 And, after a tiny nibble, I think with all the right ingredients, we have a winner.  I'll let you know after the shower.
Posted by Gigi