I've been a tad stressed lately.  (for maybe the past year or so....who's counting?)

Friday?  Friday was the worst of the worst. 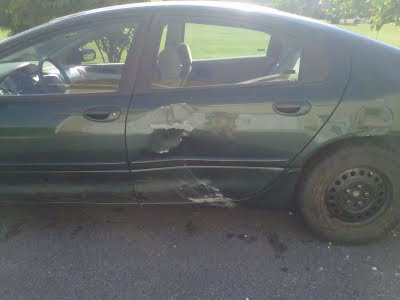 Friday, as I was talking to a co-worker/friend about the memorial service of our other co-worker's wife (it was hard! He was broken.  Completely and totally broken - AND when he came in to work this morning it was even worse) that had taken place the night before when I received a call from a strange number.
It was Man-Child telling me he'd been in a wreck.  Not an "accident" but a WRECK.  He sounded more terrified than I'd ever heard him.
My friend, having no idea what was going on but having ascertained it wasn't good, just shooed me out saying, "Go.  Just go!"
I kept him on the phone as I ran for the elevator.
I asked what happened.  He'd run off the road.  He said he hit a tree.  I asked if he was alone; he wasn't.  He handed to phone over to the woman who was with him.  The one he'd gone to for help.
She gave me directions and promised to stay with him until I got there.  She told me to drive safely.
Obviously, she's a mother.  She understood.
Needless to say, I drove like a bat out of hell - as safely as I could.
When I pulled up on the scene of the accident, I was almost in tears.
The car was in a ditch, practically in the woods.
But my son, my heart, was walking toward me without a scratch on him.
When I got out of the car he fell into my arms and I just held him.
I haven't seen him this upset and shaken EVER.
Me?  Well, I haven't been right since.
Apparently, he was going a tad too fast around a curve, took his eyes off the road for a second.....that's all it takes.
He side-swiped a traffic sign and a couple of trees and landed in the ditch on a lonely, un-traveled back road. Where God only knows how long it would have taken for him to be found had the accident been worse.
Thank God he didn't hit a tree head-on.  Thank God he walked away from it.
You know, I was told when I was pregnant that I would soon feel a love that I'd never felt before.  I was told that this child of mine would become the focus of my life.  But no one ever told me how it would feel to have my heart walking around outside of my body.
I know that he has been scared by all this; I know it. With the benefit of youth and that "I am invincible" attitude that only teens can have he is getting over it.  But I have been traumatized.  This incident has scarred my very soul.  The "what if's" are pinging around in my head.
The other two accidents were just that; we can laugh about them now.  But this?  This could have been life-changing.
I have informed him, in no uncertain terms, that he is not to have anymore accidents/wrecks because my heart certainly can't take it.  Especially since it's walking around outside my body, unprotected.  Hopefully, he's learned something.
And to that woman?  That stranger that stayed with my child and made sure he was okay for the 15-20 minutes it took me to get there - I can't thank you enough.  You are a hero to me.
Posted by Gigi