And THAT is how I found myself creating a tutorial about indoor fountains.

You can all go over and thank my dear friend, Cora for this one....

When I blogged about the lucky bamboo being completely and totally root-bound and how I had to SMASH the pot to get it free a few days ago - she wondered why I didn't soak the dirt to soften it to make removing the plant easier and thus preventing me from breaking the pot.

It also made me realize, that in my quest to keep from over-burdening you with boring details, I left out some important points.  I didn't explain the plant and it's living environmental AT ALL very well.

Thus began an email exchange where I explained that the bamboo is a water-based plant so that there was no dirt to "soften."  She then wondered how I kept the plant upright in the pot, which led me to more explanations and I also mentioned in passing that it was also a "fountain."

She then replied, "No kidding???  How cool is that!!!  Were you able to get it all set back up in the same manner, with a new pot?"

Which led me to reply, in quick detail, how it was done.  Which led her to reply, "You need to do a post on this...or email me some pictures!  Please!!"

And THAT is how I find myself blogging about how to create a quick and easy fountain for your home.

Now, had I known that there would have been any interest at all in this little project, I would have taken pictures of the whole process last weekend.  But since I didn't and since I am NOT draining the pot and emptying it of its contents to recreate the process that I've already gone through more than once, we will just have to improvise with terrible, after pictures taken with the camera phone.

As a little background - I came across this idea somewhere on the web when I was researching feng shui some years ago.  I've always liked the idea of indoor fountains - the sound of the water on the rocks is SO soothing.  And according to feng shui principles, it is good for the "chi" in your home.  Whether that is a crock or it really works is debatable considering all that has gone on over here lately.  But I DO know that the majority of feng shui is just basic common sense design.  AND I like the sound of the water over the rocks.  So there you go.

Anyway, I found a similar thing online somewhere and adapted it....because their way was too complicated for me.

A pot (with NO drainage holes)
LOTS of rocks (small pebbles/gravel and larger, decorative river rocks)
Water-based plant (such as bamboo)
Submersible fountain pump (can be found at most Home Depot/Lowe's type stores for around $20)
Depending on the size of your pot, you may need styrofoam or packing peanuts.

Another note - remember we are doing this Gigi's way (i.e., EASY).  You could get all fancy and drill a hole higher up in the back of the pot to run the electrical cord through - being sure to caulk the hell out of the hole to prevent leaking.  But WE aren't doing that.

If you have a smaller pot you can use the pebbles/gravel as your base in the pot.  If you have a larger pot, you would be wise to use the styrofoam/peanuts as it will keep the pot from being too heavy to move.

Center the plant on top of your base and start putting more (or begin to put) the pebbles/gravel in to anchor the plant.

Once you have enough pebbles in, place the submersible pump into the pot - letting the electrical cord hang over the lip of the pot (see?  We aren't all fancy about it).  Also make sure that the pump is kinda deep.  Because if you don't it will then spit water OUT of the pot in the middle of the night when you aren't looking and soak your table.

Ask me how I know this.

Now you will begin to place the river rocks in.  Your goal here is to cover the pebbles and the pump.  BUT you want to keep the pump's spout uncovered.  That is important.


Place the pot in the spot you want it and - THIS IS THE KEY - be sure the electrical cord hanging over the lip is at the BACK so no one can see it.

And viola` - you now have an indoor fountain.


Just be sure to remember to "water" the plant often because if you don't evaporation will cause the pump to be exposed and pumping nothing but air.

Which will lead to the pump burning out.

Ask me how I know.

Oh, and you might also want to check on the plant every year or so.  Just so you don't end up with this.... 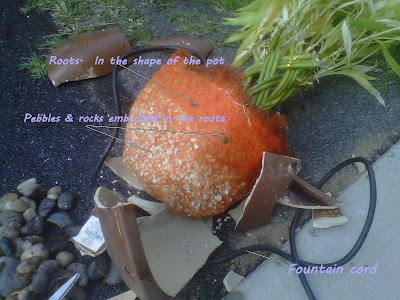 Or this.....
Now that you know how easy it can be; go make yourself an indoor fountain and let me know how it turns out.  And, extra points to you, if your husband walks around saying "We MUST have a leak somewhere!  Do you hear that?!" like mine did after I first made it.  Which I have to admit, I found kind of funny.
Posted by Gigi