Warning - This is going to be random

As you know, Friday was Man-Child's first game of the season.  He told me that Varsity games are much more of an "event" than JV games.  He wasn't kidding.  I had to park what seemed like a mile away and hike my way to the field through throngs of teenagers.  In fact, I ended up missing the kick off and the first touchdown, which apparently happened in the first minute or two of play.  There wasn't a seat to be had in the bleachers - so I had to stand at the fence for the entire game - the majority of which I couldn't see because of those big boys on the sidelines.  But I was able to snap a few pictures.


All in all, it was a good game.  We won 50-0.  According to Man-Child and Hubby it wasn't a great game since there wasn't any competition.  In fact, our guys backed off in the second half to give the other a team a chance.

In other news, if you are on Twitter, then last weekend you will have witnessed my bad mom moment when I suddenly realized (2-3 hours later) that Man-Child wasn't upstairs sleeping as I had assumed.

You may recall that last Friday Man-Child had a scrimmage game that was located a couple hours away resulting in a very late night.  On Saturday, I woke up and proceeded with my usual routine.  As I was making my coffee I found a note that said Gone Fishing.  I knew hubby had planned to go that morning and thought it sweet that he left me a note reminding me.  Which should have been my first clue.  Hubby rarely leaves me notes.

After a few hours of tiptoeing around the house, in an attempt to let Man-Child rest up after his game and late night, I wandered into the kitchen and glanced at the note again - it was signed by Man-Child. *sigh* What kind of mother doesn't know where her son is at all times?  On the up side, he left a note so I guess I've trained him well in that department.  The reason I'm telling you all this? 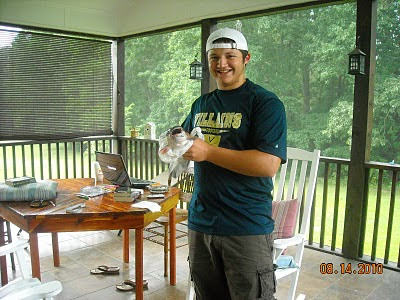 Because Man-Child caught his first fish.  And it was a pretty big one.  Apparently, he has pictures with it still on the string so you can see it properly, but he has yet to email them to me.  The brat.  Hubby has tried and tried to get MC interested in fishing ever since he was a little guy to no avail.  MC went with his buddies just to hang out.  Apparently, his friends are pretty avid fishermen.  So while they were doing whatever it was they were doing to prepare to fish, MC was practicing his casting.  While practicing, this thing jumped onto his hook.  I can just imagine the looks of amazement from his friends - here they knew what they were doing, when this newbie comes along and accidentally catches the biggest fish of the day!

Tomorrow is the first day of school - how did the summer go so quickly?  I'm still in shock over the fact that MC will be a JUNIOR this year.  How can that be?  It's going to be a busy year with PSATs to be taken, to seriously start thinking about college, a driving license test to be taken, finding the money (somewhere) to get MC a car (so I can quit being the taxi service that I have become) and a myriad of other tasks that I have yet to be clued in on.

As yesterday, I was lazy, restless and just a bit stressed nothing (and I mean nothing) was accomplished.  So today, I don't have the option of being lazy or restless (there's nothing I can do about the stressed part unfortunately).  Which means there will be a whirlwind of activity going on around here - laundry, cleaning, taking MC to get shoes for tomorrow (which this is his fault since he's been too "busy" to go with me), trying to get his haircut (again, his fault.  They had all week to do this and they didn't), getting his books and things together.  Hopefully, all this activity will keep my mind too busy to worry.

That pretty much wraps up what's been going on over here.  I warned you it would be random.
Posted by Gigi