You'd think I'd have learned my lesson and bought a single story house....

Despite what you may have heard (or assumed) - I am not graceful.  In truth (hanging head in shame) I am somewhat of a klutz.

This disability does not go well with someone who loves her shoes (especially the ones of the high-heeled variety).

In my short lifetime (quit snickering), I have been known to fall down stairs and even, miraculously, UP stairs many times.

Three particular incidents immediately spring to mind (well, maybe four - if you want to count that one time....but it was only three little stairs....so maybe we'll let that one slide....).

The first time that I can actually recall flying down stairs sans feet was in high school (and wearing sneakers, for god's sake).  Oh the horror !  It immediately got fifty times worse when I actually landed since someone dared to run for the school nurse.  Who came flying around the corner with a wheelchair!!  I was totally humiliated (remember how easily humiliated you can become as a teen-it sticks with you forever-never mind the fact you were lucky enough to walk away.  And completely fine - no bruises to even speak of.....ah, youth).  But henceforth, I was known as "that girl who fell down the stairs."  It may even be noted somewhere in a yearbook.  Thank goodness this was before cellphones with cameras......otherwise, I'm sure I'd be the most recent YouTube sensation....

The second time that is etched into my memory (and brought up as often as Man-Child dares) was in, what I like to call "our first" house (see, hubby already owned a house when we first got married - so technically....).  This house had stairs that went straight up from the front hall.  This was also the first house I'd ever lived in that actually had stairs.  So, for the first seven or so years that we lived there I was fairly careful on those carpeted stairs, particularly since for the first couple of years I had a toddler clinging to my leg - which really isn't conducive to running up and down stairs.  By the time Man-Child was in 5th grade though I'd pretty much become free and easy on those stairs.  Until one morning, dressed to the nines for work with very cute mules on my feet, carrying my purse, a glass of water and who knows what else, I hurried downstairs.  Only to miss the third one down (of the fifteen).  I landed, HARD, at the bottom.  Man-Child came running after hearing the horrific THUD that I made.  As he arrived upon the scene, there I lay, gasping for breath, when all of a sudden one of my very cute mules came crashing down upon my head; which just added insult to injury. And that glass of water - hit the ground next to my head, splattering my carefully coiffed hair.  I groaned.  I heard him inhale deeply before shouting, "Are you okay?!"  After a couple seconds, in which I took inventory of every part of my body, I grunted that I was okay.  Once those words left my mouth, he began to laugh hysterically.  Apparently, he gets this from me; as I've been known to giggle a time or two at inopportune moments.  Surprisingly, I was able to get up, slip my shoes back on, and continue on with my day, in quiet humiliation, without any pain, although the hair was a bit frizzy that day, if I recall.

The third memorable time that my gracelessness came into play was probably about four or five years ago as I was racing UP the concrete stairs in the stairwell at work (of course in a cute pair of heels) when I misjudged, slipped off the lip of the step and fell; striking that point right under my patella (and bonus! how often do you get to work THAT word into a post? Which is the intellectual way of saying right between the kneecap and the shin bone).  Unfortunately, this time I was in excruciating pain and wasn't alone.  Several women from a different floor were coming up at the same.  After many applications of ice, I was fine.  But the humiliation was (and is) still there every time I came across these women, who had been so very kind and concerned.  From then on, I've been known to take the elevator at all times possible.

So why am I sharing all my gracelessness with you?  Because of these..... 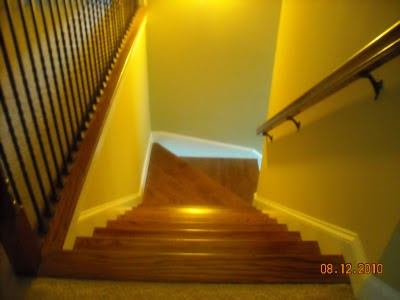 (sorry for the poor quality - the lighting just refused to cooperate with me...
and no, my walls are not day-glo yellow contrary to what you are seeing here)
These stairs aren't carpeted, nor are they straight.  Notice how there is a landing?  That just means there is a possibility for me to fall down these - thump straight into that wall and then fall down these .  . . 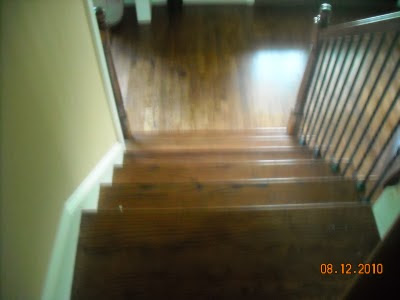 (Which if the truth be told, I've already missed the last couple of steps at least once... but who's counting at this point)
So every morning, I approach these stairs with trepidation.  In fact, I have recently begun the practice of descending them in bare feet - carrying my shoes.  Because I have a feeling that next time I go flying, I won't get off so easily....

And yeah, next house (if I make it till then)?  Totally one story.....
Posted by Gigi