Guess what I made??? 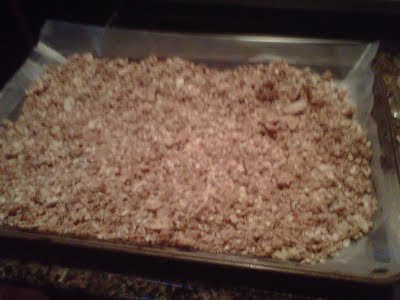 It all began, because I was bound and determined to make sure this boy of mine was eating a good breakfast in the mornings; and besides....he needs a little nurturing now to "remind" him to come home and visit me EVERY. SINGLE. WEEKEND next year when he goes off to college.

We all know, I DON'T cook.  Period.  Sure, I can bake but that is TOTALLY different from actual cooking.

Anyway.....up until last year breakfast (lunch and dinner) have been Hubby's domain.  I stayed out of it.

Well, after the situation last year things have been in kind of a tailspin and breakfast, especially during the week, kind of became a catch-as-catch-can situation during the school year.

Which basically meant that Man-Child was eating crap or going to a fast food joint and eating more crap.  Now don't get me wrong.  I don't mind crap every once in a while; in fact I even enjoy it on occasion.  But a growing boy needs to start his day out with a decent meal most of the time.

So, at the advent of this school year (which began last Tuesday) I have been making him breakfast during the week.  The only problem? My skills are very basic.  Which pretty much means eggs (scrambled); pancakes (which takes too much time usually) or cereal.

Since Man-Child isn't a huge fan of eggs you can imagine his disappointment when he came downstairs this morning to find me making....eggs.  Again.

(What? They are quick.  They are easy.  And they are full of protein!)

After some discussion over said eggs of other things he might like for breakfast (not many of which included protein by the way.  So any suggestions?) I came away with a few "do-able" for me ideas.

He likes cereal.  Okay.  He likes oatmeal; especially apples and cinnamon.  Or maple syrup and brown sugar.  Okay.  He likes granola and yogurt.  And fruit.  He likes fruit.  Okay.  He likes bacon.  Okay.  He likes link sausages.  Okay.  And he likes pancakes, waffles, any kind of muffin, banana bread, and basically any pastry you can name.  Okay!  I can do all that easy enough.  I also did some Google searching to see what I might come up with.

Then I hit the grocery store.  But holy cow is granola expensive!!  So I did some more Googling.

And came away with this recipe.  Not only is it super-easy to make it is really inexpensive!  I think I spent about $3.00 bucks for a HUGE can of rolled oats - the rest of the ingredients were in my pantry. 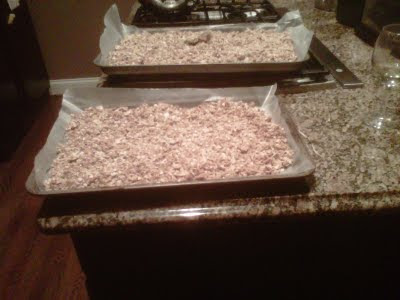 That looks like an awful lot of granola!  Hopefully, it freezes well...otherwise we will be sprinkling on it on everything!

Then I had a nibble (burning my fingers because it was still hot) and OH MY!  Is it yummy!  I might add just a *touch* more sugar and vanilla next time - but otherwise? Perfect!

And?  I have MORE than enough rolled oats left over to attempt homemade oatmeal.  Watch out, hubby!  There is a new cook in our kitchen.
Posted by Gigi