Respectfully Yours from Here Is What I Think . . . has tagged me to play along in this game. Basically, you go to the 8th folder and choose the 8th picture to post about. (Actually this all sounds vaguely familiar…..)

Anyway, I had to tweak the rules a bit for privacy reasons. Apparently, the 8th folder/8th picture is of someone else’s small child. And since they don’t know I blog, I can’t very well go and ask if she minds if I put the image out there.

So since I have various folders with pictures, I went to another and pulled the 8th image from there. And this is what I found (which is actually one of my all time favorite pictures): 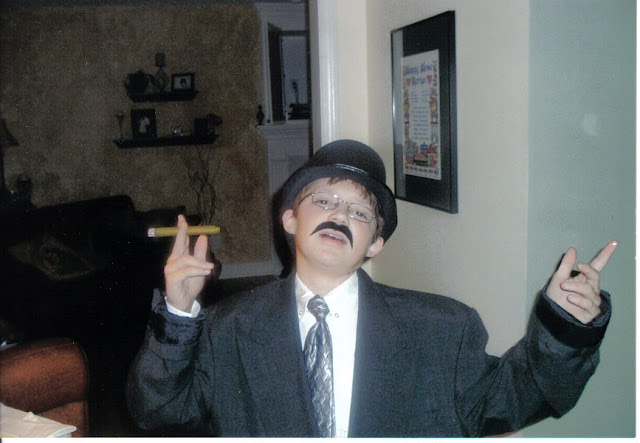 This is Man-Child when he was about 10 or so dressed up for Halloween. He was going as a big shot. He walked into the kitchen and started out with a whole routine – asking about his driver, waving around a wad of cash (fake of course), puffing on his (fake) cigar and here is where I captured him in character.

I actually ended up using this picture for New Year’s cards (unlike the insanity that is Christmas cards, I don’t do that on a yearly basis – but couldn’t pass up the opportunity to send out cards with this image and a message reading, Hope you have a Happy & Prosperous New Year).

Now I suppose I’m to pass this on, but I think I’ve noticed that a majority of you have already participated in this tag (or one very similar) and since I'm a rebel that way – I’m going to leave it open to anyone who wants to play along.

Oh, and since I already changed the rules, feel free to do the same!

Thanks, RY!  This game brought a smile to my face as I found this picture again!
Posted by Gigi