Now that we made it through the weekend – that sick feeling is back with a vengenance (and a surprise ending).

During the weekend, it was easy to forget.  In fact, the weekend was quite normal.  We went to a cookout, chores were completed, etc.

Today, the fact that Hubby is out of work smacked me right in the face.

I was quickly reminded of the fact that when I once again realized - I don’t like having him home during our morning routine.  I tried hard to hide this from him.  I don't think I did a good job.

No, I don’t want to have conversation while I’m having that first cup of coffee and reading the paper. No, I don’t like tripping over anyone while I’m trying to put on my makeup or do my hair, or making the bed, or anything else I might be doing.  Man-Child knows the routine and we pretty much don't even see each other until we are in the car and ready to go.   I’m sure I’ll get used to it....eventually. (even better, let's hope I don't have time to get used to it!)  Although, I’m sure Man-Child definitely appreciated having his dad home as he got a full “weekend” type breakfast this morning.  French toast, sausage, etc.

My email also provided reminders.  I had two in my inbox this morning.  One from a friend trying to coordinate details for a girls-weekend to her hometown in June.  I’ve responded telling her what was going on and that I couldn’t commit.  Bless her.  She immediately responded - swore it was her treat and that she'd have her entire family on the lookout for a job.  Of course, I'm not going to take her up on that.  I'd rather go when I can be sure to pay my own way.

The other one?  I’m slapping myself silly over.  At a cookout this weekend, I offered to co-host a baby shower for a friend.  Because I forgot!  How could I have forgot?!  I forgot because everything seemed so normal.  So although it's entirely possible that Hubby will be working by the time the shower rolls around - I really need to bow out now - just in case.  I feel horrible about it.

And, I need to quit job-searching.  I need to concentrate on my job.  But I can’t.  I know it’s the control freak in me.  I also know that I am more proficient on the computer and using it to find information; which then leads me to think that he’s missing stuff.  But, I can’t do that during office hours.  Do you know how hard it is to restrain myself? (But, since I typed most of this earlier and am only now editing and tweaking it - you'll be glad to know that I was able to restrain myself.  For today at least.)

We’ve also learned of some things that went on behind the scenes.  It is positively Machiavellian.  Seriously.  And one person involved?  Well, let’s just say that although he claims to be a fine Christian man - his actions say something completely different.  A wolf in sheep's clothing is more like it.  Ah well, he will be un-masked in the near future I’m sure.  Again, I’m arming myself with karma. (Come on karma!!  Kick in already while I am still around to see the results!  Please!)

Hubby is angry.  Very angry.  I don’t blame him.  I understand.  I’m angry for him.  I’ve had to explain to Man-Child that this is a normal reaction.  And that his dad will be going through a lot of emotions in the coming days, as will we all I'm sure.

Once again, thanks for your kind words and support.  It means the world to me.  And this medium?  The ability to get it all off my chest?  That is life-saving.  I don't know what I'd do if I didn't have this outlet. 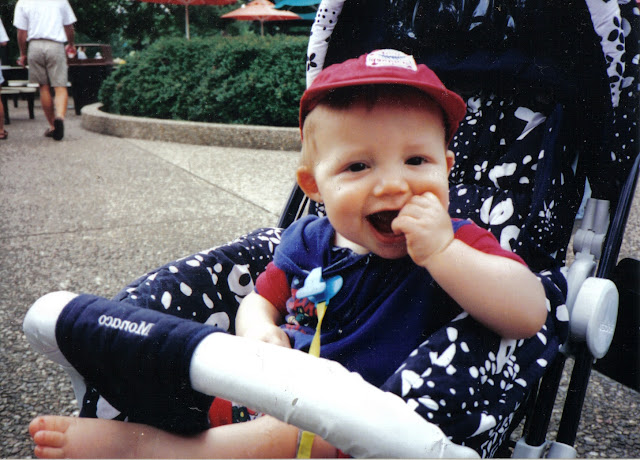 M-C when he was probably about 9 months old.  It was our first trip to the zoo.  Apparently he had a great time. 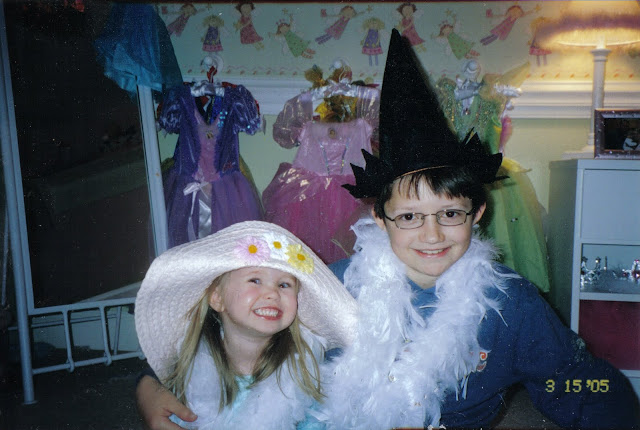 Man-Child (about 10 yrs) and a neighbor who adored him; because he was always willing to play whatever she wanted.
Obviously.
These two pictures have permanent residence on the refrigerator because they never, ever fail to make me smile.
Oh will he kill me if he ever sees this last one out there for all the world to see......so remember, sshh!  Don't tell him, it's a secret.  Just between you and me.
Posted by Gigi