A look at my Mother's Day

It was a beautiful day, if rather chilly, but the sun was shining so we were off to a good start.

Apparently, the guys left the shopping till the last minute.  But that was fine.

I'm 14 1/2 years into this Mom-gig.  I'm not going to be receiving the sweet, hand-made, sticky (from glue and who knows what else) cards anymore.

Basically, I was in a "acknowledge me and move on" kind of mood.

(Which, between you and me?  I blame on PMS - which somehow seems to be worsening with age.....)

Anyway, I started the day off with a load of laundry.  Yes, Hubby offered to do it.  He gets many gold stars for that (anyone who at least offers to do laundry? I'll love them for life!).  But I have a "system."  So, I told him no, thank you (although in retrospect, I should have at least let him do his own clothes.....).

Then there was errands to be ran.  Which apparently, worked to their plan.  For whatever reason, that I have yet to figure out - we have only one card for a particular store.  I had it.  Hubby asked for it.  (Why I had it, I'll never know since he's the only one that uses it - which may explain why we only have one card instead of two....).  When I handed it over - I told him, I don't need anything.  And I was serious.  I don't.  We made a plan to meet back at the house to head out for an early dinner, hoping to avoid the crowds.

After a frustrating morning/early afternoon of running errands (again-PMS and idiot drivers....) I headed home.  And there, I found this...... 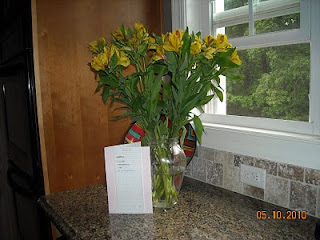 from my son.  Who apparently, wanted to make me cry with the card.  I didn't (again, blaming PMS - usually I'm a sucker for a poignant card).  But had I known his intent, I'm sure I could have found a few tears.
There was also some beautiful heart-shaped ruby earrings from hubby - sorry no picture as they are currently in my ears.  Sometimes when he ignores me, it's a good thing.
When they finally came back home we went off to dinner.  Which was wonderful.  From what I can remember.
In addition to PMS, I'd been suffering with allergies all day.  So finally, in desperation, I took some medication.  But did so un-thinkingly.  Normally, I only take one pill as I simply cannot handle a full dose.  But for Man-Child I am usually doling out two pills at a time.  So in that mode of thinking.....yup, you guessed it; I took two.  And had some wine with dinner.  By the end of it, I could hardly keep my eyes open and, for the life of me couldn't figure out why.  Apparently, was too groggy to put two and two together.  It's a good thing Hubby was driving!  There was no way I could have gotten us out of the parking lot, much less all the way home.
Upon arriving home, I took a much needed, quick cat-nap and then went to finish laundry.  Where I then discovered Man-Child's clothes littering the floor.  After threatening to set them all on fire if he didn't get them off the floor and into a hamper or, preferably, into the washing machine immediately I then discovered peace and quiet for the rest of the evening as they then hid from me.

OH!  And the kicker?  We ran out of propane yesterday.  Yup, the stuff that enables us (I mean Hubby) to cook and the ability to have hot water was gone, nada, kaput!  Hubby had ordered it last week.  They never came.  It was really lovely trying to get ready for work this morning.......luckily they came today (or there would have been hell to pay - PMS, remember?).  I will be talking to them tomorrow about a scheduled delivery from here on out - particularly since this one cost us a whopping $600!   Hmmmm, maybe those earrings should go back??  Noooooooooo!!!

And then, as I was taking pictures of the flowers and the card, I noticed this...... 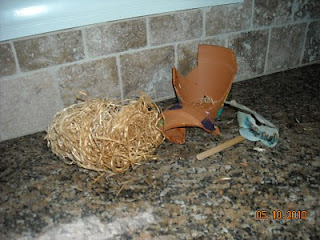 This was a Mother's Day present from Man-Child from many, many moons ago (1st or 2nd grade?).  *sigh*  This is what nearly brought me to tears.  The little paper flower on the popsicle stick says "I love you."  and has his name on it.
I had just found this the other day - pushed way back behind the mixer.  I'm sure someone (hubby) placed it there to get it out of the way - he doesn't believe in decorative or sentimental touches apparently.  I should have left it there.  I pulled it out and put it on the window sill so that I could smile every time I saw it.  Someone opened the window without moving it; and this is the result.
Here's hoping I can piece it back together - again.  Someone has already broken this once before....
So what have we learned here?

Mother's Day + allergies + PMS + over-medication + no hot water + out of control laundry + broken treasure = not a very happy mom (although her ears are spectacularly decked out).

I'm sooooo ready for next year!
Posted by Gigi