I don’t know why y’all put up with me. . . and few other ramble-y bits UPDATED

But the email thing really drives me crazy (and, honestly? It was a really bad day….).  It’s just that y’all always have something witty, profound or just amazingly awesome to say and when you do, I want to respond to YOU.  I don’t want to respond via comments, because really?  How often do you come back to look at comments?  Not often I’m betting.  So I usually don’t – and then I feel bad because it starts to feel like I’m not holding up my end of the friendship.

So after venting my frustrations on you (I’m sorry) the wonderful Mrs. Lovely stepped up and reminded me that she had posted on this very same subject some time ago and told me to steal her words.  That I cannot do – but if you click here – you will be taken to her post that will explain, in plain English, how to adjust your settings in just a couple of easy steps so that when you comment and I want to tell you just how fabulous you are I can click your name and respond to your comment via email without having to go through hoops to do so.

Now, although, I hope that you all will do this – I won’t demand it – yet.  But in the long run, it really makes everything easier for everyone.

In other news . . .  the reason I was so testy the other day is because Hubby was informed by the Unemployment Commission that his benefits would likely be denied because the ex-employer was trying to say he was fired for cause!  I have always known that these people are self-serving toads, but I never expected them to tell bald-faced lies about Hubby, particularly considering all he’s done for them.  To say that I was upset was an understatement!  I immediately found a lawyer – in the event that this had to be escalated.  Fortunately, this morning we discovered that his claim has been accepted and that benefits have been awarded retroactively and that we should be receiving them shortly.

We don’t know exactly what happened, but I am assuming that after speaking to Hubby the Unemployment Commission called them back and asked them to back up what they were saying with paperwork – which they couldn’t possibly do – since they have nothing!

While all this was going on, Hubby was informed that the position he applied for was awarded to someone else.  Very disappointing – but we are trying to keep a positive attitude and figure that it will all work out for the best eventually.

In the meantime, I will leave you with this picture that I took yesterday.  I love it because it shows the sunshine despite the rain.  And the fact that I actually took a decent picture (on a cell phone at that!) means that I must show it off - since most of my pictures are either fuzzy, have my finger in them, or I've cut someone's head off. 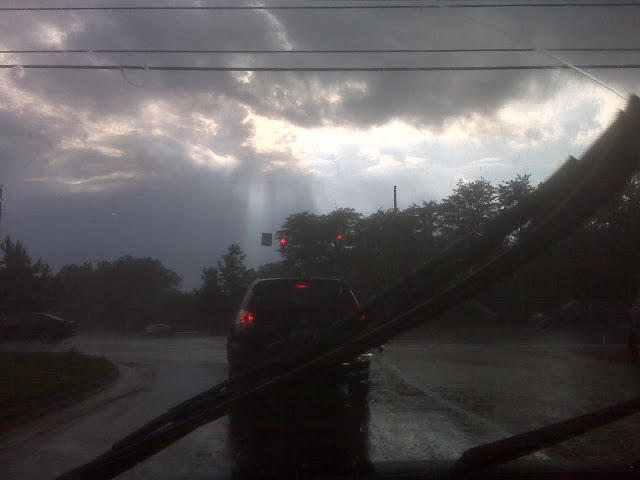 Just goes to show - there is ALWAYS a light at the end of a tunnel.


*******
WC & BrightonMum - the best way to explain it is like this.  When you comment, they are sent in the form of emails.  If your profile isn't set up just so, when I hit reply (which I do often) and shoot off a response - it goes into outerspace somewhere and not back to you.  So, basically, it's like you send me an email and I reply to your email.  It includes the subject (the post), your comment and my response.


And no, I was at a stop light (a very looooong stoplight) when I took the picture.
Posted by Gigi