Okay. He's thirty-freakin' one. She's eighteen.
She's a child.
Why would he ruin this moment in the spotlight for her? 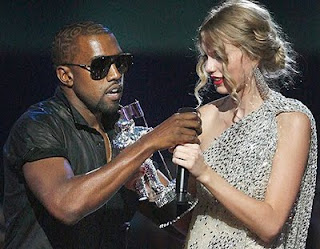 How dare he ruin this moment for her? He's an adult - he should know better.
Ok, maybe he really thought Beyonce deserved to win. But this??? Say it on your blog, or tweets, or whatever - later. Let this girl shine in her moment. Why humiliate her? Because that is exactly what he did - humiliate her. She, who did not deserve this kind of treatment.
TOTALLY unacceptable!!
Now he's giving some half-assed apology. Really?
Maybe this is his style; whatever - it totally isn't cool.
She won the award; she deserved it. Let her bask in the moment.
What a jerk. Or as Pink said, "Kane West is the biggest piece of sh*t on earth. Quote me."