Lazy Cow is not my title anymore! (at least for this week)

So yesterday I admitted to one and all that I've become a lazy cow. Apparently this public humiliation (and the fact that I had today off, hubby was working and Man-Child slept the morning away) actually forced me to clean out the closet.

I've been dreading the closet. Really, really dreading it.

When we moved in almost a year ago, everything I owned was just shoved willy-nilly inside to be dealt with at a later date. Certainly, I had more important things to deal with at the time.

But this morning I was productive. I even made Man-Child chocolate-chip muffins - which he didn't partake of until very late morning; practically afternoon. ::sigh:: This from the child that absolutely refused to sleep ever when he was small (no, I am not exaggerating) which made me completely incoherent and insane. . . but I digress . . .

I hauled out six - yes, count 'em, SIX - large trash bags full of clothes, bags, belts, scarves, shoes. I'm now trying to determine if I want to deal with trying to place them with a consignment store or just giving it all to Goodwill. Knowing me, I'll take the easy route and just drop them at the Goodwill; so I really don't even know why I'm having this internal debate. But it's habit. I talk to myself all the time; sometimes I agree with myself, sometimes I don't. (And no, I am not completely crazy. Yet.)

Then I dropped by the local hardware store for a few organizational items; and viola! The closet is complete. I feel much better now. 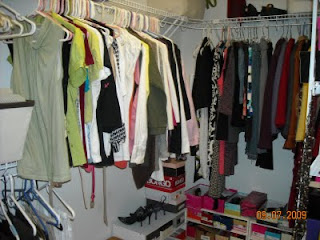 Much better than before! 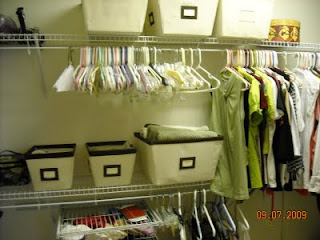 Notice all the empty hangers? Evidence of all that was bagged up and moved out.
Whew. I feel much better now. Except for the fact that the pantry is now calling for attention. And those damn baseboards.
Ah well, no more planned days off until Thanksgiving. I guess they'll have to wait.
Posted by Gigi