Here it is a wet, dark Monday.  ::sigh::  We had such a wonderful weekend that I think I’ll take time to look back at all we did and savor each moment.

A dear, dear friend of mine went into labor Friday.  She called and asked me to pick her mom up from the airport as she was on her way to the hospital.  I did, of course.  It was so wonderful to see how excited she was for the impending arrival of her second grandchild.

Unfortunately for my friend, she was in labor for 30 hours!!  She didn’t get an epidural until toward the end.  She’s crazy like that.  After it was all said and done she said I was right (of course!  I always am) about the epidural.  Duh.  My thoughts are why endure the pain if you don’t have to?  Granted it slowed my labor down some, but I was relaxed enough that hubby and I played cards during the downtime!

Saturday we had friends over for dinner.  Hubby made pizza – his first attempt and holy cow!  They were amazingly awesome.  Definite hit.  Adult beverages were consumed but no over-indulging (which with this particular crowd is rare!).  Fun was had by all.  The wild savages kids didn’t even wreck the house too bad – which is amazing considering there were at least five of them.

Sunday, of course, was the best day.  As you know, I brought home some pretties.  And they are making me very happy every time I look at my feet on this dark and dreary morn.

Then we headed over to welcome home mom and new baby.  He is so adorable.  I held and cuddled the little guy the whole time.  Almost makes me want one.  Almost.  I think instead I’ll just commandeer this one whenever I need a fix.  What is it about babies that make you just go to mush inside?  They are sweet and innocent.  Their little skin is so soft and almost translucent.  Little fingers and toes.  Tiny little ears. ::sigh::  Truly a miracle in every sense of the word.  They make you realize that no matter how bleak the world seems, how bad the economy seems that there is truly hope in the world. 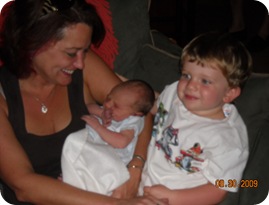 Big brother isn’t so sure about the new addition to the family.  So far, he seems to like him; but I have a feeling that in a couple of weeks he’ll be ready for him to leave!

I tried to get my friend to trade one of her precious guys for my big guy; she didn’t go for it.  She said she couldn’t afford to feed him.