The dishes. Again! What is so freaking hard about it? Really, it's not like there are ten people in this family. There's three. That means that there aren't that many damn dishes to do. We even have a freaking dishwasher.
I am so frustrated. I just don't know what to do anymore. I left to run errands this morning before he woke up. I told hubby to be sure to tell him that I am angry and not to look at me or talk to me today. Apparently, hubby didn't make it very clear.
As I was browsing through the shoe section - eyeballing a very lovely pair of heels - oh joy! They were on sale! Mine. Ahem - sorry, I digress. As I was trying on the lovelies, the beast Man-Child actually called. I ignored it. Then he called again. So I answered. He asked where I was and I informed him that I had told his father that I wasn't talking to him and said goodbye. I'm sure the older lady across from me was shocked as she turned and hustled out of the shoe department right quick. Any way, I decided that the lovelies were just what I needed to combat the stress of being a mom to a teenage monstrosity.
Once I made it home, the Man-Child came lumbering down the stairs to ask me how my day went. I just looked at him blankly. Very mature; I know. He proceeded to follow me around the house trying to get me to talk to him. He informed me that he had cleaned the kitchen, his bathroom and bedroom and had started his laundry. And that he had done all this to make it better. Give me a break. Those are his standard chores - the chores he is supposed to do anyway! He informed me that I was immature. I looked him dead in the eye and informed him that I was very angry at him and he really, really did not want me talking to him right now. He looked at me like I was crazy and proceeded to spout his excuses. I looked at him and told him that he really did not want to hear what I had to say to him at that moment and to go away. He turned and stomped all the way to his room. Yeah - like that's mature. I felt like sticking my tongue out at him.
Apparently, shunning works very well.
Hubby then came to me and asked what was going on. I told him (like he didn't know! I had asked him earlier what we were going to do about these on-going infractions. He, as usual, had no answers). He then had the gall to ask if I was going to mad at the Man-Child all day! He is not helping the situation. And why, oh why, am I always the disciplinarian? Why doesn't he do it once in a while?
I'm really not angry - like I am leading the Man-Child to believe. But I am frustrated. In my opinion he is being very disrespectful. He knows what his duties are; he knows how I feel about the kitchen being left in a mess. He knows I don't want to wake up to a gross kitchen. But yet, he continues to not do what has been asked of him. What can I take away? He's not driving so I can't take driving privileges. I could ground him - but since he's staying home this summer he's pretty much already grounded as there isn't much for him to do around here and he doesn't know anyone around here.
I know he's a good kid and that I could have a lot more problems with him that I do. I know this! I thank God every day for having such a wonderful boy. But I'm so frustrated with him and at my wits end. He lives here - he has to contribute. We all do.
So for the moment shunning seems the way to go. I think once the shunning is over though I'm going to have him do most of the household chores this week. Maybe that will teach him that the little bit he is asked to do around here isn't so bad after all.
Any and all suggestions would be appreciated!!
Oh, and since I'm sure you are dying to know - here are my new lovelies. Aren't they beyoouutiful? 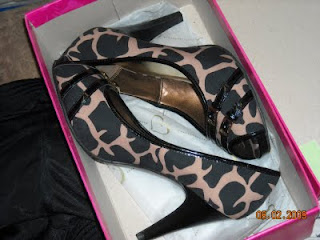