Today is Hubby's birthday.  And though he won't see it (because this blog is mine dammit!), I'd like to pay tribute to him.

He is a wonderful man.  With many faults, to be sure (okay, maybe only a couple).

But this man puts up with me on a daily basis; and I have MANY faults (at least that's what he thinks - I think I'm perfect just the way I am!).

He will go to the store in the middle of the night when I am freaking out because I thought I saw a mouse (I was right).  He loves me even though I've been known to leave the keys in the car; with the car running; while we had dinner out.  And he laughed about it.

While I was pregnant he insisted on cleaning the bathroom (the one chore he really, really hates) because he didn't want me to breathe in the fumes from the chemicals.

He met my insane family; and married me anyway.

He gave me a beautiful son and is a wonderful father.  He's the kind of father I could have used when I was Man-Child's age.

He thinks of us first.  And worries about us constantly.

He works a job that he can't stand because he doesn't want to put us at a financial risk.  He struggles through because he knows that we want to send Man-Child to a private school.  He makes necessary sacrifices.

Although, he claims to despise my (ever growing) shoe collection; he doesn't grumble too loudly.

If he knows that something is really important to me; he takes care of it asap.  And usually, it's just something small; because it's the little things that mean the most.

He actually takes the time (usually) to put thought into his gifts.

He is a thoughtful, wonderful and caring person.  He is generous with his time, talents and whatever else he has to give.  He is a fabulous role model for Man-Child. 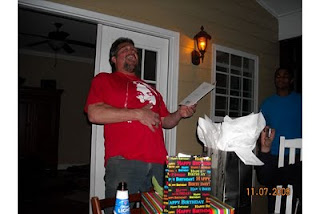