Another milestone has been achieved. 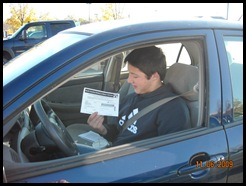 This morning Man-Child went for his learner’s permit.

Actually, we should have gone a month ago.  But between my schedule, football and (although he won’t admit it) his nervousness we never made it.

Once I realized he wasn’t in school today I declared that it would be done today.  I woke him up early, for a day off – even kind of fed him on the way.

The entire drive to the DMV his leg was jumping up and down.  Finally, he admitted that he was nervous.  I told him that he would be fine.  And, if by some chance, he didn’t pass the test that it would be okay because he could come back on Monday and re-take it.

We pulled into the parking lot and I wished him luck.  He stared at me like I had three heads and asked if I wasn’t coming in with him.  I laughed and informed him that I was indeed coming in.  We signed in and were seated.  Almost immediately he was called and I was asked to wait in the waiting area.  I could see how nervous he was being left on his own; poor guy.

He answered all the questions; only pausing to ask me for our home phone number (see what cell phones do?  They prevent you from learning your own phone number!); he took the sign test and the vision test.  Then went to take the written test.  I think he was made even more nervous by the fact that one of his football buddies came in to take the same test.  I believe he felt pressure – because God forbid should he have to walk out without his permit in front of his friend!

The next thing I know, they are calling me over to pay the fee and go over the restrictions.  M-C was beaming.  He had passed with flying colors. He informed me later that the test was really easy.

Hubby was to have met us at the DMV so that I could go on to work; but he was unable to find his keys (apparently M-C had mislaid them).  So he agreed to meet us at a half-way point.  When we walked out of the DMV, I handed M-C the keys.  Once we were settled in the car he looked at me and informed me that he didn’t think he could back out.  I told him he could and he needed to learn.  He drove us all the way to the half-way point without incident (albeit a little slowly – but that’s okay!).  He was so proud of himself!  And so was I; although I now have another little crack in my heart because this milestone means that he’s moving just a little bit further away from me.

I know that’s how it’s supposed to be.  He’s supposed to spread his wings and become independent.  But for the longest time he needed me for everything; then only for some things; then a little bit less and then to the point where he basically only needed me to drive him everywhere.  Very soon now he won’t really need me at all anymore – it’s a little heartbreaking. 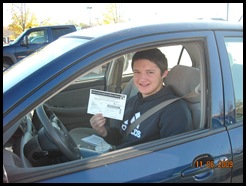 He’s growing up so very fast.  How did this happen?  I’m so proud.  But am crying inside just a little bit.

In other news; the boys played the best they’ve ever played last night.  It was the first time that they’ve ever played as a team.  And as a result, they won!!  28 to 7.  Needless to say, Man-Child was on cloud nine last night!  And is now looking forward to being on the Varsity team next week (although that most likely mean sitting on the bench…).