Well, as I’m sure you are all aware – I have had MAJOR issues lately trying to find pants for work that aren’t too long.

Yes, yes.  I have looked in the Petites department at every store I’ve been in for the past 6 months.  But apparently, some joker out there in merchandising (or whatever the hell it’s called) seems to think that putting a petite label on pants that are actually meant for the human of normal height is hilarious.  (Guess what bud?  SOOOO not funny).

Anyway….I had some time to kill at lunch today.  I decided to run into Sears.  Why?  I don’t know.  I don’t even like Sears.  I’m not sure why...  Oh wait, I do know why I went.  I’d seen their Sunday advertisement saying that all their boots were 40% off.  Uh, don’t bother – all their boots were ugly (and cheap-looking).

Anyway….(yes, I know I keep getting off-topic.  Roll with it) I wandered into the Petite department just to see.  Because by now, I’d totally given up.  I was planning on buying pants that were too long and either shelling out the money to have them altered or take the plunge and try to alter them myself – which would pretty much guarantee that I’d have to throw them away.

But there they were!  (Cue the angels singing!)  Actual Petite pants – that were the right length!  AND even better they were on the clearance rack for $10!!!!  AND they even had the three basic colors I wanted.  AND they had them in my size!  Could it get any better?  I didn’t think so.

Needless to say, I grabbed them up and floated to the checkout counter where I informed the woman that they had made my day.  This seemed to please her.

She began to ring up my purchases and my day got even brighter.  Because apparently everything on clearance was an additional 50% off – so my $10 pants??  Yeah – now only $5.00 a piece!!!!!!!  I almost kissed her.  But that would have been totally weird and I probably would have been banned from the store for life – which would totally suck since I now know where to find pants (at least until that joker figures out he’s missed one place to spread his evil).

So there – this proves that not every Monday has to be horrible!  See it really is the little things in life!

PS – since the picture of my newest pretty was so dim, I took another one, just for you! 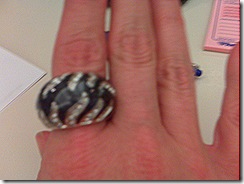