Happy Thanksgiving all my dear friends (and for those that don't celebrate - Happy Thursday!)

I've seen many lovely posts today about what folks are thankful for; I've seen many that recount the tribulations of cooking the dinner - I know tomorrow I will see many about the family drama that ensued.

For us, so far, the day has been quiet - unless you count the relentless hammering and power tools - apparently the guys who are framing out the "shed" don't do Thanksgiving.  These guys have been here since about 8:00 am.  Hubby has even told them to go home and spend the day with their families.  Hmmm, I'm thinking they either don't like their families - or figure that if they can knock this job out of the way quickly then they can move on to another.  It's amazing to see what these two lone guys have accomplished today. 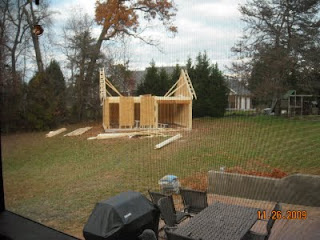 When they started this morning - there was only the concrete slab!  This is what it looks like 8 hours later!

Man-Child and I diligently made the pumpkin pie and the cake-thing (I'm going to have to come up with a name for it), peeled and diced the potatoes in preparation for morphing into mashed potatoes, par-boiled the damn yams and prepared them to be baked.  We even shoved the turkey into the oven.  It was nice to have a helper.  One that didn't complain one bit - as long I made sure he had his breakfast.  He even thanked me for being a good parent (although he did tell me that Father Joe told them to thank their parents at their Thanksgiving service at school - but was quick to add that he would have thanked me anyway; hmmmm sounds a bit suspicious - but I'll take it).

Now we are just waiting for the turkey to finish and Hubby to magically transform all these things into a dinner.

Surprisingly, a few stores were open today - so I went out for a couple of hours to scout things for tomorrow.  From what I can tell there is very little that I am going to want or need that would necessitate me getting out of the house at 4:00 am.  The sale papers show only a couple of items that I might consider rising that early for until you read the fine print only 5 items per store - no rainchecks.  I know I'm not going to be first in line for that deal so why bother?  I figure in a few weeks the stores will still be having sales and I won't have to fight as many hordes of people.  But I am kinda nervous because I've read that retailers have not stockpiled merchandise this year - so the pickings are going to be slim.  But I'm not too worried about it as Hubby and Man-Child have nothing that they must have or will DIE on their lists (heck neither one has even come up with a list - maybe that means they don't want anything?).  And upon review - I have most everyone else taken care of - so I think I'm good.

At any rate, after tonight it's official - the Christmas Season is upon us in full swing!!  Hmmm, really, really need to get on the ball - still haven't taken a family picture for the card; still haven't created the invites for the annual Open House; still haven't even thought about the Open House!

I'd like to say that usually this is all done by Thanksgiving.  But sadly, it's not.  Usually about this time every year I go into panic mode.  But it gets done.  Somehow, some way, it gets done.

Anyway, I've bored you all enough with what's been going on here.  I have nothing deep and insightful; or witty and charming to say - I'm tired and am suffering from severe sinus issues - sorry.

So have a wonderful Thanksgiving.  Give thanks for the many blessings that have been bestowed upon you and yours and pray that our troops come home safely and soon!

P.S. - Thank you Lakeviewer for following along!  Sometimes it's funny, sometimes it's boring, and a LOT of the time it's random!!
Posted by Gigi